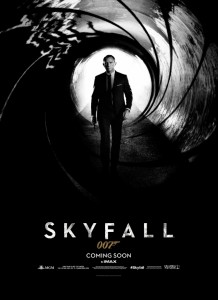 The 23rd Bond movie wasn’t always a sure thing. After 2008’s Quantum of Solace, the Bond franchise was in disorder due to the financial troubles of MGM studios. Despite having contracted Sam Mendes, the film fell out of production for a while, and was thought at one point to have been scrapped. Luckily upon exit of bankruptcy, MGM started production of the film, which is lucky for everyone as Skyfall looks to be the best entry to the series in decades.

The film starts dramatically with the loss of a hard drive the contains the identities of NATO agents undercover in terrorist cells. Bond takes chase and in the ensuing chaos is taken down by a bullet and falls to his presumed death.  During his absence the British Secret Intelligence Service is targeted in a series of attacks that involves a bomb at their headquarters. At the news, Bond begins his resurrection and resumes his role as 007. He must face a new villain that is his equal in almost every way, and wants to target M (Judi Dench), director of MI6.

The smartest thing about Skyfall is how it easily fits into the world Bond has inhabited for the past 50 years. Gone are the sleek overproduced days of the Brosnan era. Skyfall evokes the feel of Bond during the Connery era, and improves on it with slick visuals and superb visual effects. Mendes makes sure not to ignore the roots of the series, and wisely strips many of the conventions that have plagued the series over the past two decades. Don’t worry there is still plenty of cool gadgetry, but it isn’t the start of the film like it was during much of the 90s and early 2000s.

If anything, Skyfall is a righting of the ship. It reintroduces (and reinvents) familiar characters, it establishes an already lived in world with its own unique set of rules and history. To top it all off, the look and feel create an air of suspense that Casino Royale brought to the table, but that Quantum of Solace never seemed to match.

Craig teams up with Mendes for the second time since 2002’s Road to Perdition, and gives his most convincing performance as Bond yet. Craig isn’t as good looking as some of the previous Bonds, but makes up for it with effortless style and grace. Craig adds a level of toughness never experienced before in the Bond series. It doesn’t feel far fetched to see him work through the pain of a bullet wound. It’s that level of toughness that makes his turn as a ladies man a convincing feat.

Javier Bardem is menacing as the film’s villain Silva, a former agent of M’s whose mysterious past has come back to haunt her. Bardem adds a level of intelligence that makes him a fearsome villain, and a charming antagonist. The film also adds a new Q (Ben Whishaw) who has been missing the past two films, a new ranking member in the British Intelligence, Gareth Mallory (Ralph Fiennes), and a seductive new agent, Eve (Naomie Harris).  Harris who shares the duties of “Bond Girl” with Bérénice Marlohe plays a surprise character we are likely to see again if the current iteration of Bond stays for a couple more films.

There is no doubt lovers of the Bond film will love the attention to detail and the continuation of the mythology of the character, and casual fans will love the throwbacks, and the convincing action. Skyfall is a perfect action film that could set a whole new bar for the series. Mendes with his attention to every asset of the production has created a Bond movie that will be hard to top. One can only hope the series builds off his lead, and continues for another 50 years.