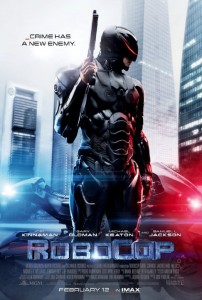 In 1987, RoboCop blew moviegoers away (no pun intended) with its blend of over the top violence, revolutionary special effects, and biting social commentary (it was the 80’s after all), all wrapped into a perfect storm of an 80’s action movie.

To me, the original source material was so unique and timeless that it never needed a remake.  Sure the 1987 version looks dated and maybe the technology is now irrelevant, but it’s the guts of the movie that made it so perfect.  So the question I was asking myself as I settled in to see a 2014 version of RoboCop was, “What can they say that hasn’t been said already?” I would soon realize the 2014 version could have just as much to say about the state of our country as the 1987 version.

In this version, director Jose Pahila makes some adjustments from the original so that it fits into what could be a conceivable American future. The film is set in 2028 and one of the biggest issues in the United States is the use of robotic drones for Military applications – as well as on the streets of America.  With many Americans fearing that robots have no emotions or moral code, robotics manufacturer OmniCorp and its CEO Raymond Sellars (Michael Keaton) are forced to explore a new idea: putting a man inside a machine.

Enter our main character, Alex Murphy (Joel Kinnaman), an honest Detroit detective and family man.  Murphy is blown to bits after a bomb that was placed under his car goes off.  Seeing the opportunity to put his idea into action, Raymond Sellers scoops up the body of Alex Murphy as begins the process of putting a man inside a machine. With the help of Dr. Dennett Norton (Gary Oldman), it looks as if OmniCorp has finally find a way to sway the American people into getting behind the idea of putting robots on the streets.  That’s until the powers that be don’t like the way Murphy begins to exhibit free will. The scientists begin to manipulate the dopamine levels, emotions and free will, putting the ethics of what Dr. Norton’s project in serious jeopardy.

There has been a massive influx of remakes and reboots coming out in recent years.  Most of them are just retreads of the original.  Every once in awhile, you will get one that takes the original source material and make something new (the Evil Dead remake is a great example). RoboCop is not only different, but it’s pretty smart. The flick is a fun, thought-provoking romp on issues we’re dealing with in our country right now. It’s handled both seriously (Dr. Norton struggles with the ethics of changing Murphy’s brain chemistry when in “Battle Mode”) and with some tongue-in-cheek comedy (a pro-robot TV news show called The Novak Element, hosted by Samuel L. Jackson).

One of the bright spots of the movie was the cast. Joel Kinnaman, who you might recognize from AMC’s The Killing,  gives a great performance as Alex Murphy. He’s able to play the loving husband and a robot alike. I really liked him a lot in the movie and I hope to see more of him in the future. Oldman, who deals with the most important moral decisions, makes Dr. Norton both sympathetic and human. But the guy who steals every scene is Michael Keaton, who brings both the insane Keaton charisma while also capturing the perfect moral ambiguity of a corporate figure head.

The end of the film suggests that there is a future for the new RoboCop as a franchise, and I’m perfectly fine with that.  I think there’s a lot of potential.  What will say for all the naysayers is this: The original movie isn’t going anywhere.  You can go back and re-watch it whenever you’d like.  The filmmakers aren’t trying to just copy what Verhoeven did in 1987. Go see it with an open mind, and I think you’ll really enjoy it.