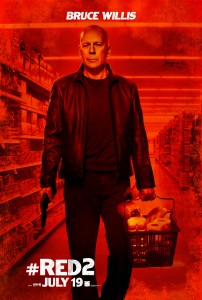 In 2010 the most unlikely of casts was assembled for the surprisingly entertaining action-comedy RED.  Bruce Willis, Morgan Freeman, John Malkovich and Helen Mirren were all labeled “Retired Extremely Dangerous,” and lived up to their designation in the film.  It was a winning formula, combining action with a well-known cast of aging not-so-action-heroes. But was it wise for them to come out of retirement for a sequel?

After once again putting his days of covert-ops behind him, ex-CIA agent Frank Moses (Willis) is enjoying retired life while shopping at Costco with his girlfriend Sarah (Mary-Louise Parker). Unfortunately his peaceful stroll down the Rubbermaid aisle is interrupted by Marvin (Malkovich), who remains paranoid of the government coming after them. After dismissing Marvin’s delusions, an attempt is made on their lives that convinces Frank that they still aren’t safe. They learn that someone has falsely connected them with a cold war operation called “Nightshade,” where a portable nuclear device was created that could easily destroy millions of lives.

Beside from Marvin and Sarah, Frank is joined by a new friend: Edward Bailey (Anthony Hopkins), who created the nuclear device and can help them find it. Along the way he runs into Victoria (Helen Mirren), who has been given a contract by MI6 to kill him, as well as Han (Byung-hun Lee) – the “best contract killer in the world.” He also seeks the aid of Russian officer Katja (Catherine Zeta-Jones), who he used to have feelings for, but isn’t sure if he can still trust her. As the clock ticks, they must find the nuclear device and clear their names, while avoiding being taken out for good.

RED, which was based on a three-issue comic published by Wildstorm, was an original and clever idea. Taking aging and retired secret agents, played by well-known actors, and putting them back into action made for a lot of fun. Unfortunately something changed between the first and second film, leaving what once was clever and energetic feeling rather empty. Most of the performances in the sequel appear to be all but phoned in, while the production quality and editing are horrendous. With almost the same cast, and the addition of some distinguished actors, the change in tone seems rather puzzling.

With Bruce Willis in the lead role, you can’t say that the star wasn’t cut out for the action. No matter how hard he tried, the problem wasn’t with Willis’ performance as much as it was with the lack of direction and poor vision. The action sequences are consistently choppy, with any given shot lasting no more than a second or two. It looks like each sequence was only filmed once, and had to be edited together the best they could with what salvageable footage they ended up with. To make matters worse, in order to get a PG-13 rating, most any trace of blood or wounds went by the wayside. I’m not one to believe that you have to be overly violent to make a good action film. But if you are going to cut throats and shoot people, as they frequently did in RED 2, it is just going to come off like you are playing a cheap game of pretend.

Malkovich is really the only saving grace in the film, providing most of the humor that doesn’t fall flat. I would have gladly taken a Marvin spin-off, rather than the ridiculous overacting by Mary-Louise Parker we are subjected to. Helen Mirren’s Victoria is fun and charming, but we see far too little of her in this film. It seems like they must have only had her for a day or two, and were forced to splice in what little footage they had wherever they could.

The one martial arts scene that is supposed to showcase Byung-hun Lee‘s talents is so poorly edited that it comes off laughable. Whoever was in charge of those sequences should have watched I Saw the Devil or even The Good, the Bad, the Weird to get some ideas of what could have worked better.

In the end, the sequel to a highly entertaining summer movie just comes off feeling cheap and rushed. Almost every penny of its $84 million dollar budget must have went straight to the cast, because we don’t see much of it in the final film. With an all-star cast, and a unique story to play off of, it should have been much better. Instead it leaves me with a bad taste in my mouth for the entire franchise.