Movies aimed towards a male audience tend to have one or two specific plotlines or point of appeal intended to cater to a specific emotion of the audience. Field of Dreams focused on a father-son relationship. Rocky showed the triumph of the human spirit and the ability of the underdog to overcome incredible odds. Transformers had giant fighting robots and, well, boobs. These films tend to focus on one forte and stick to it. 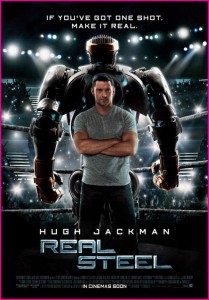 Real Steel, my friends, gives the middle finger to that conventional thought process and tries to pretty much incorporate every good part of a guy movie and blend them together. I guess in theory it’s a good idea; whoever thought to put peanut butter and chocolate together made a killing doing so.

Set roughly 20 years into the future, Charlie (Hugh Jackman) is a retired boxer who now makes a living traveling around with giant remote-controlled fighting robots. The very definition of a wandering soul, he’s willing to take on any challengers if the price is right; unfortunately, he’s not too great at it and ends up losing his last robot. After the fight, he also finds out that the mother of his child has died and he has the chance to fight for custody of his son, Max (Dakota Goyo), or he can turn custody over to the sister of Max’s mom, Debra (Hope Davis).

Not exactly enthralled with the idea of being a father, he cuts a secret agreement with Debra’s husband; for $100,000, he’ll sign custody over at the end of the summer, meaning he’ll have to spend two months with Max, but he’ll get money to buy another robot to make a living.

With his newfound wealth, he goes out and buys the best robot possible, which promptly gets destroyed in the first fight.  Desolate, he begins to search for parts in a junkyard when Max stumbles (literally) upon a sparring bot with the ability to shadow box, or mimic the movements of its owner.

After pleading with Charlie (who believes the robot to be too weak to compete), Max finally gets his chance to test out the robot, which he’s dubbed Atom. Although outmatched in terms of power, Atom displays an incredible resiliency and ability to absorb punishment and emerges victorious. Encouraged, the pair continue on the circuit and climb the ranks, eventually earning the chance to fight professionally.

Stop me if you’ve heard this one before.

The owners of Zeus, who hasn’t had to go more than one round with any opponent, invite Charlie and Max to their luxury box at Atom’s first fight, where they offer Charlie $200,000 to buy Atom. Charlie obviously wants to take the money, but Max refuses and walks out. After the bout, which Atom wins, Max publicly calls out Zeus’ owners and challenges them to a bout.

The acting is adequate. There isn’t really much of a script for the actors to work with, so I can’t really write anything effusive about it. Hugh Jackman is, well, Hugh Jackman. Dakota Goyo is a dead ringer for an older Jake Lloyd if he’d kept his Phantom Menace haircut and voice inflection. I actually Googled the film after I saw it to see if it was, in fact, Jake. Evangeline Lilly of Lost fame plays Charlie’s love interest and is pretty much the only actor besides Dakota who portrays any emotion besides anger in the film.

So clearly this film isn’t intended to be a heart-wrenching drama. Still. I found myself watching as the action unfolded. If you’re not going to re-invent the wheel, make sure it’s done well. In this sense, Real Steel is terrific. The visual effects are terrific. The film isn’t set in a distant, post-apocalyptic future, so the technology seems plausible.

The film itself is not only watchable, it’s actually pretty enjoyable. Almost every bit of the second half is taken from a Rocky film, including the ending (note I didn’t say which film), so it’s not going to win any awards for screenwriting. Despite this, I found myself cheering for Atom, urging it (him?) to win. If a sports movie accomplishes that, then it’s done its job.

For this, I cannot pass harsh judgment on Real Steel, even if it isn’t exactly original. I’ve eaten sushi at Tani before, but that doesn’t stop me from ordering the Oh My God roll every time I go. If you’ve thought about seeing Real Steel, do it. Turn off your brain and just enjoy it.

Real Steel gets a B-.