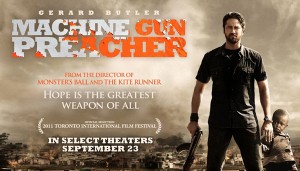 It can be hard to critique a movie that has truly noble intentions. Before the screening, the viewers were given mini-posters with instructions on how to donate to the disaffected people of Northern Uganda and Southern Sudan. While the main character in this film undoubtedly helps hundreds, if not thousands of people in this region, he is hardly noble…so we’ll critique away.

Machine Gun Preacher is possibly one of the worst movie titles of all time. It summons images of Rutger Hauer as a Hobo with a Shotgun and Cheech Marin as a…machine gun preacher. It does not reflect the strangely odd mix of Hotel Rwanda like realism and indie-drug movie shock value.

Machine Gun Preacher has a lot to say in its subtext, but on the surface it is a story of a violent, biker drug addict who attempts to find salvation by saving Sudanese children. The weakest part of the film is it’s introduction of Gerard Butler’s titular character. The film opens with his release from prison. He soon finds his wife, played by Michelle Monaghan has found Jesus and given up her occupation as a stripper to “pack mushrooms” in a factory. While the early scenes that establish Butler’s violent past are shocking and effective on their own, they ultimately do a disservice to the tone of the rest of the film.

The bulk of the film is about Sam Childer’s (Butler) relationship with the children he’s helping and the effect it has on his family. These are the parts of the film that work the best. The relationships he forms are touching, but the best emotional moments come from the conflict that occurs within him. It would have been very easy to make a “noble” film about a down-trodden man who finds God and is able to turn his life around by helping others, it would be much harder to make that film where the man remains essentially a prick throughout the entire story. But that is exactly what these filmmakers have done…and it’s effective. Unlike some Angelina Jolie or Lifetime movie about a similar topic, Machine Gun Preacher is pretty bad ass in some parts, but also raises some very interesting questions. For instance, when is it appropriate to stop helping someone in need? How do you help someone else when you have little resources yourself and can you be addicted to something positive? The film may not answer all of these questions, but often the best films don’t.

For a movie with “preacher” in the title that’s about the process of finding God, there is very little “preaching” to the audience. It’s very difficult not to side with some of the more unsavory decisions this character makes. The film is intense and very disturbing in some scenes, but I think most viewers who take the plunge will be glad they saw it. It’s in limited release, so finding a showing may be difficult, but locally it will be showing at Plaza Frontenac. *Note: As you’re leaving Plaza Frontenac, try not to think about the $1000 purses people are buying next to you and the starving African children at the same time.  I did and it was very unsettling.