I’ll confess: I used to party a lot.

I wasn’t a monster party animal or anything, but I was somewhat social in college and joined a fraternity who on occasion threw social gatherings. I couldn’t down a keg by myself, and I wasn’t out of control, but I could shotgun a beer in 1.8 seconds, and I managed to have a little fun at the parties. 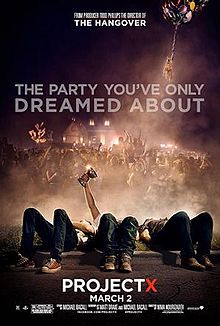 Having said that, I never got to go to a party like Project X. This is the party some people dream about going to. It’s raucous, it’s offensive, it’s…fun.

Seventeen-year-old Thomas (Thomas Mann) happens to celebrate his birthday on the same date as his parents’ anniversary. They’re heading out of town for the weekend and give him permission to have a few friends over.

Naturally, his friends Costa (Oliver Cooper) and JB (Jonathan Daniel Brown) take this to mean as many people as humanly possible. Perhaps English isn’t their primary language. Poor guys. Costa especially wants to throw a memorable party, so he starts texting everyone in their classes and spreads the word via Facebook.

The party takes a while to get started, but when it starts, it never relents. Kids start showing up in droves, and before they realize what’s happened, there are 1,500 people at Thomas’ house. The boys being boys, they go after the one thing almost every single guy goes after at a party. Thomas reconnects with an old friend, Kirby (Kirby Blanton), for whom he realizes he has feelings for. Unfortunately (or fortunately, depending on your point of view), his current crush, Alexis (Alexis Knapp) also shows up, and he has to juggle his feelings. Obviously, a party that large eventually draws the attention of neighbors, who call the police, and eventually all hell breaks loose.

Now, if you’re seeking a deep morality tale or a complex plot, you won’t find it. There isn’t really any character depth, but I think that’s a good thing. If there were any semblance of that in the film, it’d fail.

Really, though, who would want that at a party? This movie’s supposed to be a party, and that’s where it succeeds on an unexpected level. The minute the DJ takes the stage, you really feel like you’re at the world’s greatest house party. The film doesn’t have the feel of cohesion or plot, but that’s part of why it works. Nobody goes to a party to discuss the complexities of the universe; they go to have a good time. If you can allow this, it’s an entertaining movie, and it’s flat out hilarious quite a bit of the time. The main group of guys are three people everyone has in their group of friends. Thomas is a bit of a loner, insecure in his role in the world. Costa is the catalyst of the whole thing, the charismatic foul-mouthed friend who can draw people to him. He’s pretty much a clone of Seth from Superbad in terms of personality and appearances.

What’s even more remarkable about this film is that, although some may decry the plot, it’s based on an actual event. While his parents were away on vacation back in 2008, Corey Worthington used Facebook and Myspace to publicize a party at his parents’ house, which turned into a gathering of 500 high school students. The party grew so out of control, the police were forced to respond and fined his parents $20,000 for their forced intervention. Worthington turned into an online celebrity overnight for the event and his crass response to news anchors in subsequent interviews.

Ok, so this film isn’t going to win any critical awards for its plot or screenwriting. Don’t see it if you’re expecting a typical film. This is a film that aims for emotions. It aims to shock, laugh, offend, and entertain, and it certainly succeeds on that front. It has everything a guy would want at a party: booze, music, scantily clad women, a midget, a flamethrower…the list goes on.

As my friends and I left the theater, Lauren pretty much summed up the experience: “I feel like I got contact drunk just by being there.” I couldn’t think of a better way to encapsulate this review. Don’t go into the theater expecting a movie; go in there expecting a two-hour party.

Now if you’ll excuse me, I need to find a Gatorade, because I feel hungover after typing this.

Project X gets a B+.