It’s October! Leaves are turning, candy is selling and another Paranormal Activity is hitting theaters. This franchise has taken the simplest of concepts and turned into a perennial money making powerhouse. The past three films have earned over $576 million worldwide off of a reported combined budget of only $8 million. The Paranormal Activity franchise is a cash cow if there ever was one. Does it deliver? Keep reading to find out. 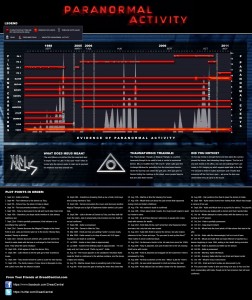 The events of Paranormal Activity 4 are the most recent in the PA Timeline. (Here’s an incredible, if not somewhat confusing infographic courtesy of DreadCentral.com.) PA 4 takes us from Carlsbad, CA to Nevada where a new family is introduced to Toby and the bizarre events that have characterized this franchise.

The inherent problem in any ongoing film franchise is keeping the material fresh, while giving audiences what they have come to expect in previous films. One of the ways Paranormal Activity, and to a greater extent all found footage movies keep things interesting is finding new and different excuses to have recorded video present in the film. In this installment, the Paranormal Activity creators have introduced Skype-style chats as yet another way to show us what’s going on. Also, as seen in the trailer, they showcase the amazingly creepy feature of the X-Box Kinect’s room filling infrared dots. Paranormal Activity 4 may do for the Kinect what Home Alone 2 did for the Talk Boy.

Paranormal Activity 4 brings more levity and humor than the previous films, but perhaps to the movie’s detriment. The first 30 minutes are pretty slow horror-wise and while many of the films signature jump scares are present, many are starting to feel stale. There are several moments where the audience is expecting something to happen, and it doesn’t; and instead of leaving me with tension, it left me with disappointment. There are enough genuinely creepy moments to make the film worthwhile, but as some have said for a while now, the franchise is starting to show its age.

Paranormal Activity 4 ultimately gives its fans what they want, another reason to go to a theater and be spooked with a hundred other people. This was my first time viewing any Paranormal Activity film in a theater and as is the case with most movies, it was better than a DVD. The communal experience of feeling the cycle of tension and release is exactly what this film is meant for. While there is a consistent through line (which may be overlooked by casual viewers), there is no major takeaway from any of the Paranormal Activity movies. These aren’t films that you’ll ponder during tomorrow’s breakfast. These are popcorn flicks and they get the job done. For the die-hard Paranormal Activity fans, the fourth installment somewhat expands the mythos, but does little in terms of clarifying what the hell is actually going on with Katie and Hunter.

I guess we’ll just have to wait ‘til next year when Paranormal Activity 5 comes out.

Have you seen  the movie? What are your thoughts on the film and the franchise as a whole?