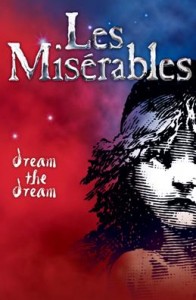 Right from the start, Les Misérables takes it’s audience captive with music and vocals that are larger than life. Not long after the show opens with “Look Down,” you can feel the raw emotion pouring out from the stage. It is here that we are first introduced to Jean Valjean (Peter Lockyer), a man who was imprisoned for 19 years for stealing a loaf of bread and continually trying to escape his sentence. Valjean expects that he will finally be free, but cannot escape his past due to a yellow passport he is forced to carry. To police inspector Javert (Andrew Varela), and almost all of the people Valjean meets, he will always be prisoner 24601. With the help of a bishop (James Zannelli), the only man who would feed and shelter him, he finds a way to start a new life and becomes Monsier Madeleine – and eventually the mayor of Montreuil-sur-Mer.

This 25th anniversary of ‘Les Mis’ spares no expense, offering a visual feast from beginning to end. With over 5,000 props and 5,000 costumes, the show brings 1800s France to life, along with the struggle of its people.  The scenery is comprised of 55,000 lbs. of meticulously crafted sets and artwork, seamlessly changing from scene to scene.

Right out of the gate, the powerful voice of Peter Lockyer bursts from the stage. Between the “Prologue” and Valjean’s “Sililoquey,” the actor perfectly hits note after note in his rich opera-esque voice. His talent is clearly apparent as he goes on for nearly 15 minutes without a break, and never misses a beat. It is also during this time that we are introduced to Andrew Varela’s commanding and menacing voice as the antagonist of the story, Javert.  And the two of them are not only battling with their voices, as they match each other tit for tat in the acting arena. Both men give superb performances on stage as their game of cat and mouse unfolds throughout the show.

Huge props have to be given to Timothy Gulan and Shawna M. Hamic, who play Monsieur and Madame Thénardier. The two of them were downright hilarious whenever they graced the stage. From the moment we were introduced to the cunning pair in “Master of the House,” we knew we were in for a real treat. The two of them add levity to the show, and you just can’t help but love to hate the characters. The way they carried themselves, down to every little mannerism was perfection. Their performances were brilliant to watch unfold, and were one of the most entertaining of the evening.

The music of Les Misérables is fantastic, and the orchestra directed by Lawrence Goldberg during this 25th anniversary tour gives any recording I’ve heard a run for its money. The music starts out strong during the prologue, as we can actually feel the struggle of Jean Valjean through the powerful notes. The rest of the show is narrated beautifully by the music and lyrics performed by the impressive cast.

There is no secret as to why Les Misérables is the longest running musical, seen by over 60 million people worldwide.  The struggle and redemption of Jean Valjean is fascinating to watch unfold, as you route for a man who broke the law but did what any other man would do in his situation. Everything about the 25th anniversary tour is fantastic, from the brilliant performances to the unbelievable sets. This show is certainly one you don’t want to miss when it comes through town.