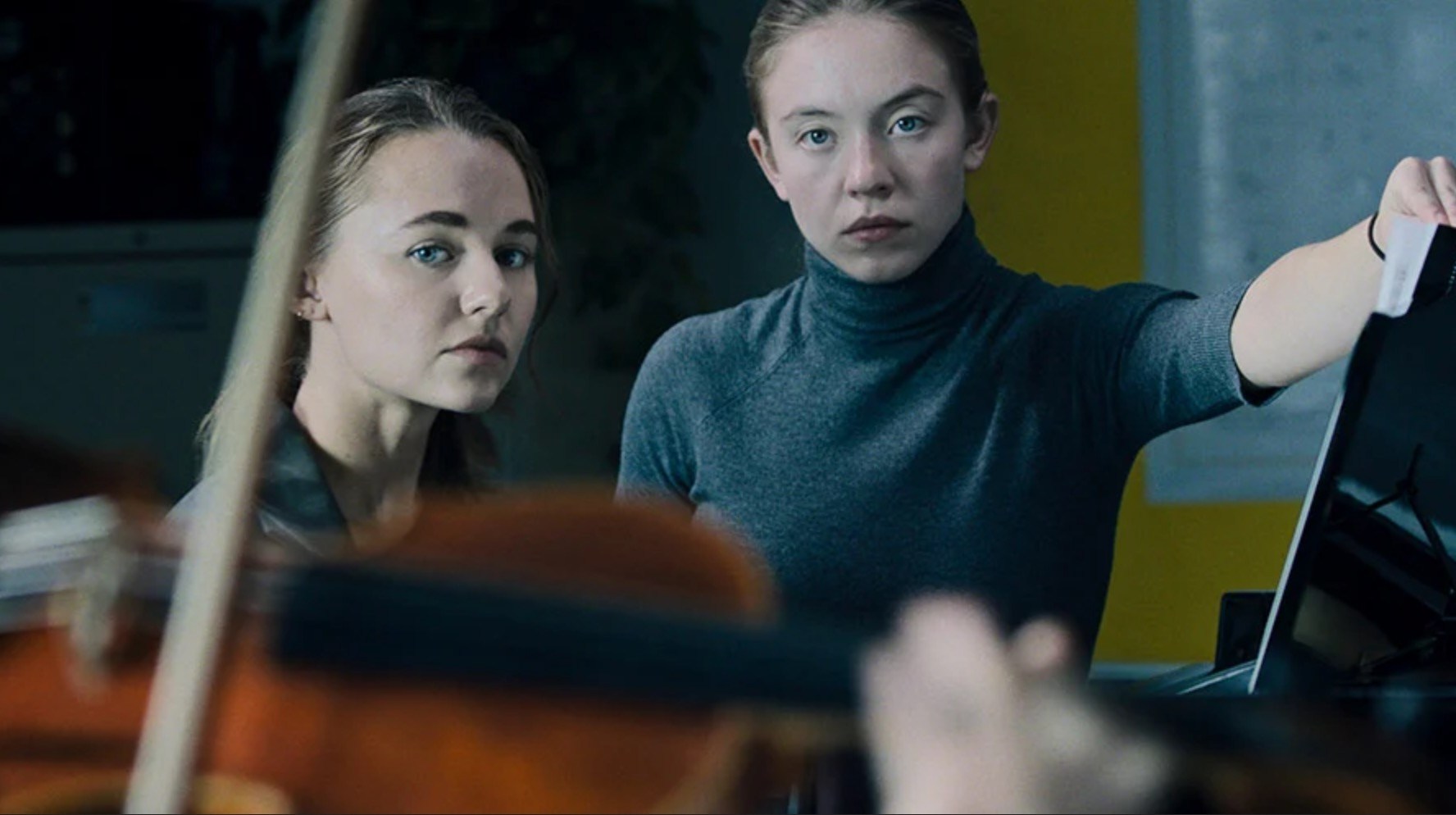 Nocturne, directed by Zu Quirke, is one of the final two films set to premiere exclusively on Amazon Prime as part of their Welcome to the Blumhouse collection.

Streaming on October 13th, just a week after the first set of films (The Lie and Black Box), this entry proves to be quite a different kind of story – one that fans of psychological horror are sure to enjoy. It seems that each title encompasses a different element of horror that is branded as part of what makes Blumhouse the powerhouse of a production company that it is. The film sees its lead cast in Sydney Sweeney, Jacques Colimon, Madison Iseman, Ivan Shaw, and Julie Benz.

The premise rubs shoulders with a familiar idea in psychological horror as it follows twin sisters Juliet and Vivian (played By Sweeney and Iseman), who are classical pianists training at an academy for performing arts and on the cusp of graduation. Following the narrative behind Juliet, the audience sees the character take a backseat to her twin sister’s successes – the better pianist, an acceptance to Julliard, the budding teen romance – all elements that are absent from her own life. Jealous of living in her sister’s shadow, Juliet finds something from a previous student, one whom recently took her own life, that seems to pave the way to best her sister and become the superior musician and performer she has long envied of her sibling.

However, being better comes at a price. Before she realizes what is happening, Juliet finds herself in the middle of what seems to be a deal with the devil. And, like all deals, her success won’t come without a price. What is Juliet willing to risk to become the best and surpass her sister as the musical prodigy she has always longed to be?

The film doesn’t take much time to develop its characters, and the dynamic of their relationships is established early on. The difference between Sweeney’s Juliet and Iseman’s Vivian creates an interesting relatability within both characters, and while the envy and jealousy are driving factors for Juliet’s intensions, it’s her the audience will ultimately begin rooting for. While the “deal with the devil” trope isn’t a new introduction into the horror genre, the way in which writer and director Quirke uses it as its own entity, almost like creating an entirely new character out of the element, is quite unique. To put it another way, if Juliet and Vivian are the players – the bargain made with malevolent forces is the playing field, and only one player has the handbook.

The performance from Sweeney was great – she completely sold it as her character, and her on-screen presence solidified the role down to the disheveled look of the character’s hairstyle. In fact, the film was solidly casted and performances were smooth from start to finish. As the film progresses, its extremely interesting to see the transition between both Sweeney and Iseman, and how their performances mirror each other during opposing plot points in the film.

As a follow-up to The Lie and Black Box, I think I enjoyed Nocturne more. While each film has its own design and premise, the completion felt by this narrative, as well as a rather gut-punch of an ending, set this film apart from the two aforementioned stories.

Being released with Evil Eye, another superb entry (with it’s own accompanied review,) it’s a safe bet to say Welcome to the Blumhouse has put itself on the map. As it was stated when the collection of films was announced, the first four features are to release this Fall, just in time for Halloween, with the final four films being released in 2021. And, if the second collection is anything like the first, I’d say that most horror fans will be ready come their release next year!