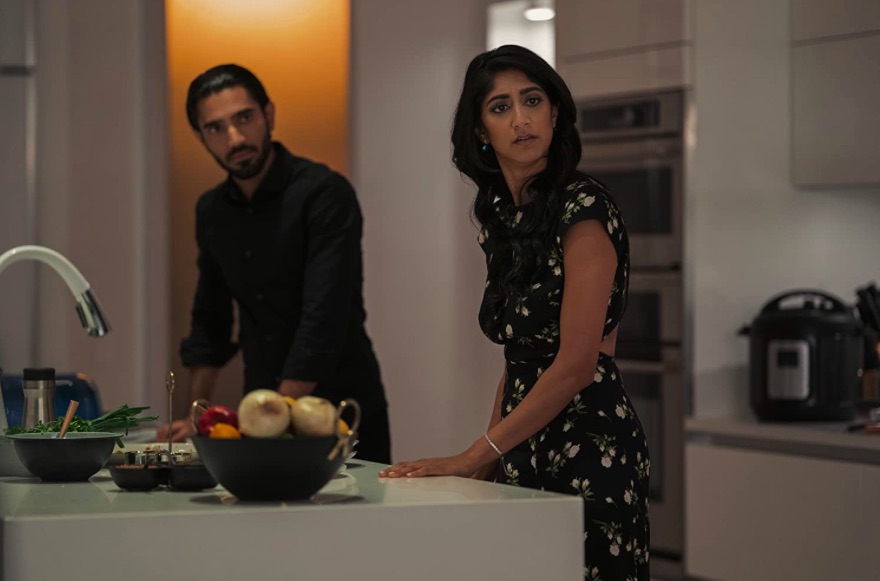 As part of the back half of the release of four films that make up the Amazon Prime film series Welcome to the Blumhouse, Evil Eye, directed by Elan Dassani and Rajeev Dassani, accompanied by Nocturne, premiers Tuesday, October 13.

My personal favorite entry in the series, the film stars Sarita Choudhury, Sunita Mani, Bernard White, and Omar Maskati. Based off the audible original story of the same name, the film is written by Madhuri Shekar. If looking for a supernatural horror flick with the necessary elements of an original story, a cast with acting chops, and a premise that pulls the viewer in from the very first scene – then look no further.

The story follows mother and daughter combo Usha and Pallavi (played by Choudhury and Mani) separated by an ocean, with Mother Usha encouraging her daughter Pallavi to follow certain Indian traditions, and wishes her to meet a man to marry. However, uninterested in her mothers forceful and insistent beliefs, Pallavi still entertains the idea of set-ups to please her mother. Plagued by her own tragic past, the audience soon finds out Usha, when she was pregnant with Pallavi, was victim of an abusive relationship, ending in the tragic demise of her abuser and creating what she believes to be a curse called “the evil eye.”

Wishing to protect her daughter from the curse, Usha soon believes her own insistence for her daughter meet a man has now endangered her as her new suitor Sandeep (played by Maskati) seems to be a little too familiar to Usha: Familiar in the way that she believes the danger Usha faced as a young woman is now resurfacing and after her daughter. With nobody believing Usha, is it possible the man she once feared would hurt her has found a way to return and now jeopardizes the person she loves most?

This was by far the best film under the Blumhouse partnership with Prime Video – and provides a uniquely detailed story that, while at times seems a little predictable, was nevertheless entertaining from start to finish. I have to say, the performance from Sarita Choudhury was incredible, believable, and was a necessary driving point that nourished the remainder of the film. Promising to never “go Hollywood,” Choudhury has always found independent and dynamic characters to portray, but it’s her ability of perform that solidifies her status as a truly amazing actress.

I also found myself completely enveloped by the story. The perfect mix of superstition and culture, Evil Eye was a refreshing breath of air in a time where cinema seems repetitive. This freshness is further appreciated as we see a lack of film releases and developments continuing to cease due to the ongoing Pandemic. With a thinning list of new titles to stream, finding one that aren’t a regurgitation of something we’ve seen an exhausting amount of times is proving to be quite the challenge, which I think furthers my liking for the film. Like many movie-goers and streaming junkies, I’ve found myself in the drought that 2020 has cinematically brought us. Sure, I’ve watched most of the films that have come out. But, finding one that you truly appreciate and scratches that itch for what you’ve been looking for is oh-so-satisfying, which Evil Eye surely did.

Premiering alongside Nocturne, Evil Eye just might be the film you’re looking for this Halloween season. Being the final film I observed in the series, my anticipation for future collabs between Blumhouse and Amazon Prime has grown immensely. And, I’m eager to see what the remaining four films are like when released next year. If this collection speaks to anything, it’s that great things are happening with Blumhouse and streaming services that are bound to deliver all the chills and vibes Blumhouse continues to deliver to audiences with each and every project.