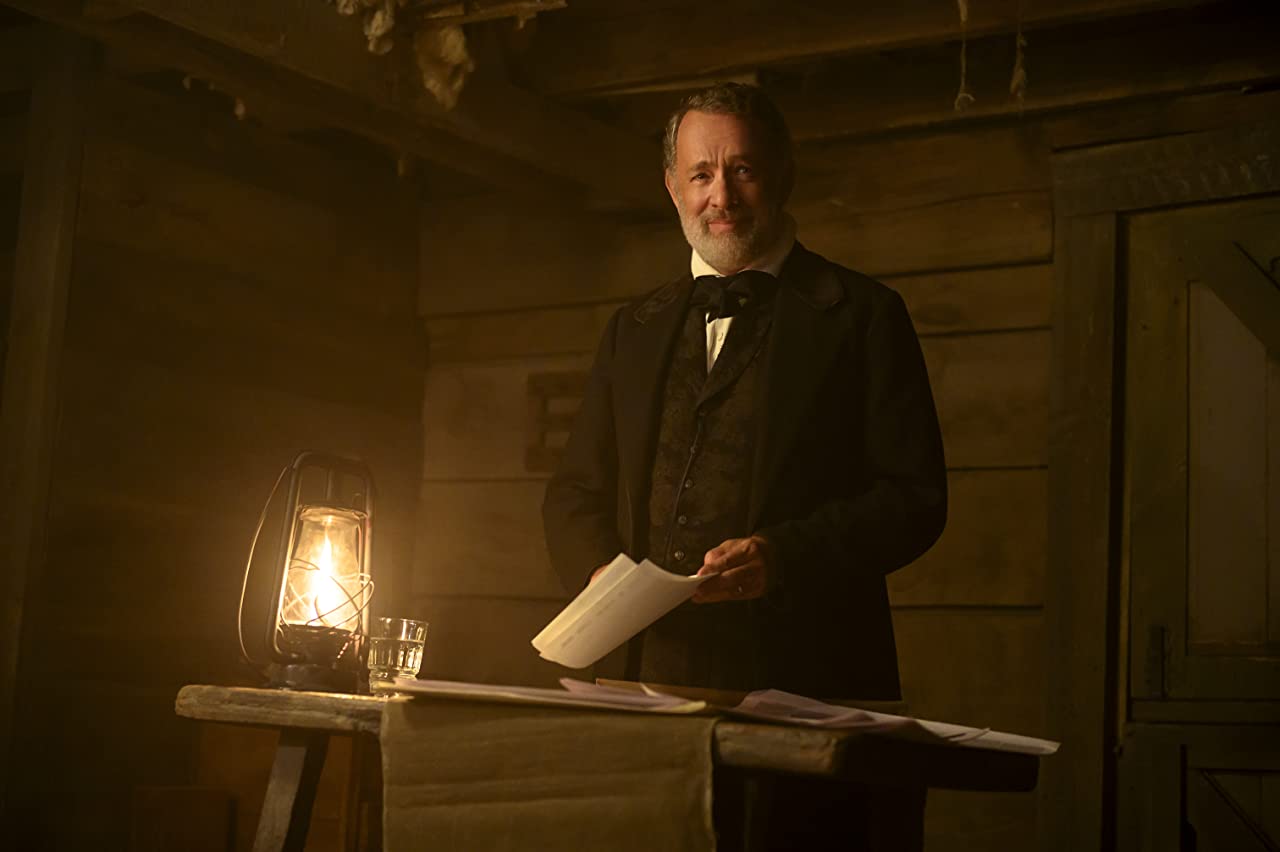 Out Christmas in theaters, Paul Greengrass re-teams with Tom Hanks to deliver NEWS OF THE WORLD.

Known for helming the last three films in the “Jason Bourne” series, the director previously worked with Hanks on the Oscar-nominated Captain Phillips in 2013. They’ve now turned their attention to a film adaptation of Paulette Jiles’ 2016 novel.

Captain Jefferson Kyle Kidd (Hanks) spends his post-Civil War days travelling from town to town, reading them news from around the world. During one of his trips, he is tasked with delivering 10-year-old Johanna (Helena Zengel) to her only living relatives in Texas. The girl was taken captive years before when the Kiowa tribe killed her parents, but has since grown accustomed to their way of life – and is reluctant to stay with her aunt and uncle who she doesn’t know.

The film is a quiet one, especially during the first half. However, Greengrass does a wonderful job introducing us to the landscape of the American West. Cinematographer Dariusz Wolski (whose impressive resume includes four Pirates of the Caribbean films, Prometheus, Dark City, and many others) paints a beautiful picture of the good, bad, and the ugliness of the time period. As the story progresses, our characters’ journey becomes more and more perilous, and turns into quite the thrilling experience.

The usual energy we’ve come to know Hanks for over the decades is nowhere to be found, as he plays the grizzled war veteran. His character is reserved, quietly contemplating which direction his life should move in after losing his wife and searching for purpose. It feels like he is channeling a bit of Rooster Cogburn from True Grit, mixed with some Clint Eastwood in Unforgiven. The actor is fantastic as always, and it is great to see him in a role like we’ve never seen him in before. Surprisingly, this is Hanks’ first western – and he does not disappoint.

Not unlike Hailee Steinfeld in the Coen Brothers’ remake of True Grit, Zengel is playing close to her age as Johanna. The actor is terrific as the young girl who is desperately searching for a home and family of her own. Always believable in the role, her portrayal of innocence shines as she navigates her new surroundings. Her chemistry with Hanks is excellent, and it is heart-warming to watch their two characters grow and bond with one another.

For a film that starts off very quiet, there are some exhilarating action sequences that are very well choreographed and filmed – which comes as no surprise with Greengrass behind the camera. And while they make for some exciting moments, the real magic lies in the characters. We’re given fantastic performances from Thomas Francis Murphy as town leader Mr. Farley, and Darrin Giossi as the leader of a gang of soldiers, among others.

News of the World is the perfect Christmas movie for anyone who loves Westerns, and a refreshing role to showcase Hanks’ endless talents. Greengrass and Hanks’ partnership has proven to be successful once again, and I’m looking forward to whatever they might work on together next.