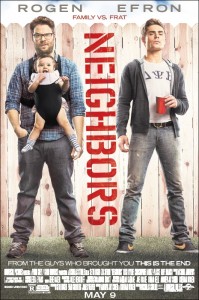 We’ve all had neighbors we didn’t like at one time or another. Hell, I went to war with a few of my neighbors when I used to live in my wife’s condo. In Seth Rogen’s new film, Neighbors, he and Zac Efron are perfectly cast as next-door neighbors who go all out in a battle for neighborhood supremacy.

Rogen sums it up best in the film, which ranges from funny to hysterical, when he tells his wife, played by Rose Byrne, “Haven’t you seen any Kevin James movies?!?! I’m Kevin James!”

Kevin James he isn’t, as Rogen is way funnier in this comedy, which sometimes pushes the line in comedic taste. While much of the comedic humor revolves around partying, pot smoking, and sexual humor, we get a rape joke that is so funny you won’t be able to stop laughing, as well as a couple racial slurs that will evoke laughter.

While Neighbors may not break any new ground in the comedy genre, it is smart, well cast, and has a good message in the end. Rogen and Byrne are quite believable as new, first-time parents. They work well together, and Byrne is quite funny in her own right. If Efron is still trying to break away from his Disney ties, this film will do it. It’s arguably his best performance to date, as he is very believable as a college student who has partied his academic career away and fears what the future will hold. Dave Franco is also great as Efron’s frat-brother who has a special talent that is as funny as it is disturbing. In fact, he belts out one of the best lines in the film. “It’s a blessing and a curse,” he howls out in one scene stealing moment.

The only gripe about the film I have is the casting of Christopher Mintz-Plasse, aka Mclovin from Superbad. He seems to get lost in the film. It’s almost as if most of his scenes were left on the cutting room floor. Perhaps his 15-minutes of fame is finally up, as he hasn’t done much since the film Role Models.

Even though the cast of Neighbors is quite solid and believable, it’s Rogen who shines brightest in the movie, even earning a producing credit. He is likeable as your normal everyday Joe. He even looks the role too, as opposed to Efron’s perfectly sculpted model-look, which Rogen plays off of in the film. The final scene with the two may be the funniest in the film, which the exception of their Batman-off, early in the film.

While Neighbors may come off as offensive to some, mainly conservatives, it should do quite well with teenage viewers. But don’t make the mistake of thinking it’s only for the stoner-crowd. It plays quite well to the 40-something crowd, who remember what it was like to have their first child and see their lives change. In the end, the film shows that family-life will ultimately trump the partying lifestyle, and that even neighbors who are the worst of enemies, can find a common ground.

Neighbors gets an A-