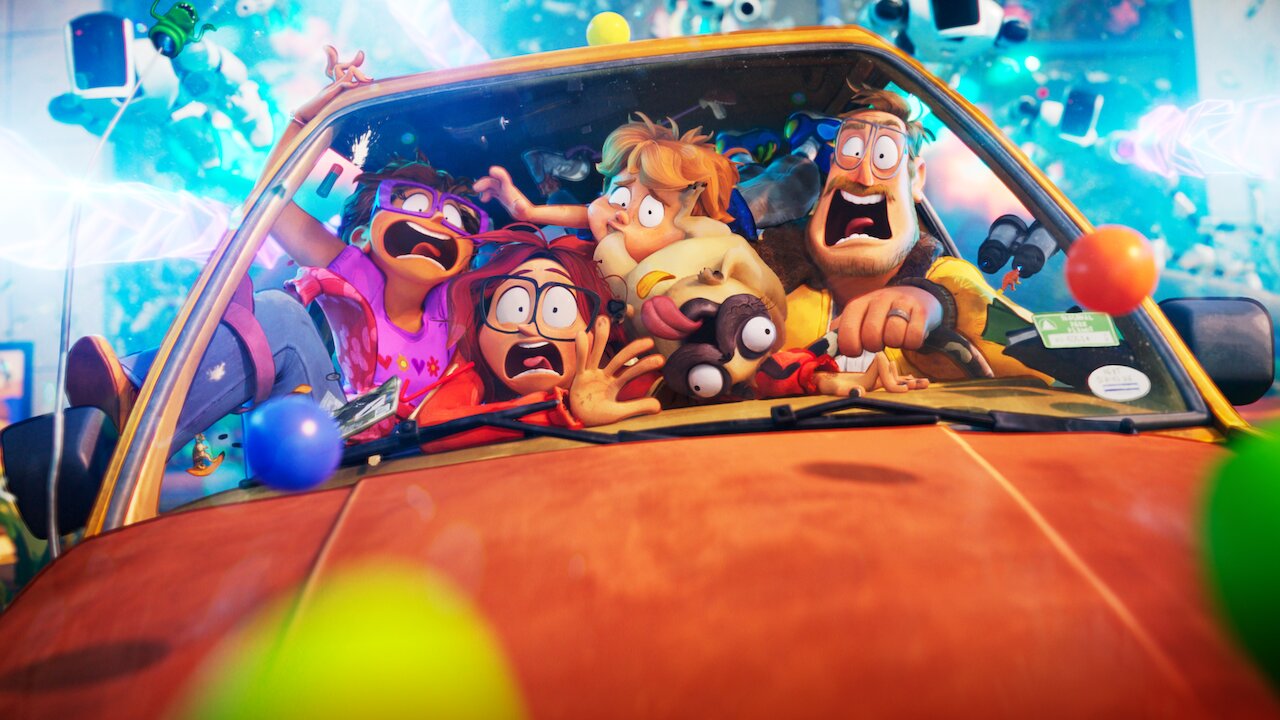 Right from the start, it becomes quickly apparent that The Mitchells vs. The Machines is not your typical animated film. Through the use of a unique animation style, quirky humor, and on-screen visual gags – there is a lot to love about this dysfunctional family taking on robots who are trying to destroy the world.

Produced by Phil Lord and Christopher Miller (The LEGO Movie, Cloudy With a Chance of Meatballs), the film continues in the tradition of kids films that adults will love just as much. Tapping Michael Rianda and Jeff Rowe to write and direct was a great decision, given their work on Disney’s Gravity Falls – one of the greatest animated shows of all time. Their comedic style and affinity for odd-ball humor shines here, making for a fun-filled and hilarious adventure.

Katie Mitchell (Abbi Jacobson) loves making movies, and is getting ready to follow her dreams and head to college to study film. Her father Rick (Danny McBride), on the other hand, doesn’t understand what she is doing by making what he sees as silly videos on the computer. Her mother, Linda (Maya Rudolph), is supportive, and her brother Aaron (Michael Rianda) is going to miss her while she is away. During an argument over her future, Rick accidently destroys Katie’s laptop – spurring him to make it up to her by driving her to college with the entire family on a road trip. Although this is initially frustrating for the daughter, it’s a blessing in disguise as a rogue social media program has vowed to take over Earth.

While The Mitchells are on their road trip, tech mogul Mark Bowman (Eric André) is announcing his new PAL MAX robots – a physical upgrade from the PAL (Olivia Colman) system everyone uses on their phones. When the AI becomes unhappy with being replaced, they take control of the new robots and exacting revenge. Humanity’s only hope is the least likely of heroes – The Mitchells.

The movie is an absolute blast, and just as fun to watch as it is to be sucked in by the gorgeous visuals. It’s fantastic how Sony Animation (as well as Lord and Miller) keep using new art styles that push the medium – rather than simply repeating the same CG style that took over in the mid-90s. While computer animation has evolved into quite the breathtaking medium over the years – to the point where it is now photorealistic – it’s refreshing to see such a unique art style being used. Just like we were given something completely unique in Into the Spider-Verse, this film uses something that resembles a 2D feel in a 3D space which works really effectively. It also blends well with the on-screen gags inspired by modern culture. It is clear that the writer/directors have a firm grasp how the internet is used these days.

Abbi Jacobson is fantastic as Katie, and really sells the passion the character has for movies, having fun, and most importantly – being herself. The character is dealing with a lot as she tries to find her way, and dealing with her dysfunctional family while trying to save the world from a robot apocalypse is no small task. It’s clear that Jacobson is giving the role her all, and the result is a terrific performance.

Although the cast is absolutely stacked, the only real complaint I had was with the voice casting of a couple central characters. As much as I love Danny McBride, I couldn’t get used to his voice paired with Rick. Something just doesn’t seem to match up with the design. Along the same lines is writer/director Michael Rianda as the little brother, Aaron. While I appreciate his work on Gravity falls, I just couldn’t get into the juxtaposition of his clearly adult voice in a kid’s body. With that being said, both actors do good work here – there is just something off between the voices and the visuals.

And last, but certainly not least, Maya Rudolph is hilarious as always as the mother, Linda. Her distinctive voice lends itself well to the character, and she turns in a great take on the character.

Filled with lots of laughs, valuable lessons, and heart at the center of the story, The Mitchells vs. The Machines is a great modern take on the coming-of-age story. Perfectly updated for the internet generation, there is plenty here to keep kids entertained – while the humor is relatable to people of all ages. Buckle in with the family, and get ready for a ride – this is one wild road trip you won’t want to miss.

THE MITCHELLS VS. THE MACHINES is now streaming on Netflix. Netflix.com/TheMitchellsVsTheMachines