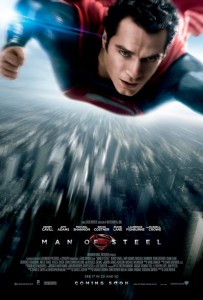 In all of American pop culture and iconography, there are few bigger things than Superman. Just ask anyone questions like, “Where did Superman come from?”, and the majority of people will tell you, “Krypton.” He’s as American as apple pie and bald eagles. Unfortunately, because of this adapting him into a successful film series is a mighty task.  Superman is so ingrained into our culture that everyone has an opinion of what he should be like on film, and is bound to lead to disappointment.  Just seven years ago, Warner Bros. tested the waters with Superman Returns, only to receive a tepid response. However, after the success Christopher Nolan had with the Batman series, Warner Bros. seized an opportunity to piggy back off its success with a new series of films in a similar vein, this time centered around the Man of Steel.

In the new film, titled Man of Steel, 300 director Zack Snyder takes the helm of the series in hope of bringing the action to the forefront. Warner Bros. also brought on Christopher Nolan to produce, and David Goyer, the writer of the popular Dark Knight Trilogy, to help transfer some of the magic to the Superman series. After numerous trailers, much of which look fantastic, the film is here.  Man of Steel may not be the film everyone is looking for, but it lays great foundation for a continuing series. Unfortunately, it contains a number of thematic pitfalls that keep it from rising to the likes of Iron Man, The Dark Knight, or The Avengers.

Let’s start with the good. Henry Cavill looks every bit the part, anyone who was worried about a British actor inhabiting the role can stop worrying. Cavill has a quiet power that should be the essence of Superman. Despite the darker tone of the film, Cavill still manages to keep his Superman in check. Superman is the optimist to Batman’s pessimist.  Helping him lighten the mood is Amy Adams as Lois Lane, who unfortunately despite her screen time isn’t fleshed out enough to drive a real feeling of romance between the two characters. At their polar opposite of the scale is Michael Shannon as the vigilant General Zod. Shannon was born to play villains, and displays his talents readily. Zod is as frightening and chilling as he should be, and Shannon gives the character the psychotic edge to push him over the top.

There are few superhero films that have accomplished the type of action on screen in Man of Steel. In the entire history of comics, there are very few characters as powerful as Superman. Snyder goes for the throat with fast moving action sequences, enhanced by a momentous score by Hans Zimmer.  By pitting Superman against Zod, we are able to see the hero unleashed, with earth shattering punches, and battles at super speed.  The action paired with the top notch visuals make this the best looking superhero film of all time.

The major downside of the film is the script, which for every unique item, matches it with cinematic clichés and overwrought dialogue.  Too much of the story is moved along at the expense of characterization, which ultimately causes the film to feel like it is missing something. Moments of cheesy dialogue are overlooked in this genre, but as the films continually get more serious, it’s hard to find a forgiving nature.

Man of Steel feels like a film set up for a trilogy. A film that combined with the sum of all of its parts might be fantastic, but viewed on its own is somewhat middling. That isn’t to say it is an awful film. If it had been released fifteen years ago, it might be the best superhero film any of would have ever seen, but with a lot of the recent films in the genre, it needs to be held to a higher standard. Man of Steel is a good film, but not a great one. It’s worth going to see in the theater, and it is thrilling enough to warrant a sequel. It’s just hard to leave the theater without thinking that it could have been better.