‘Man of Steel’ Review From a Superman and Comic Book Fan 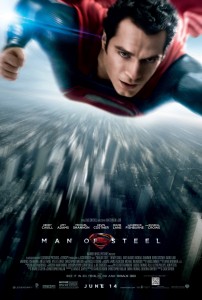 I have been waiting for DC Comics and Warner Brother’s kick off to their own cinematic universe and that day is finally here.  Finally, Superman is back in Man of Steel from director Zack Snyder.  The film takes a completely different approach to the superhero film.  The movie focuses more on the “man” rather than the “super”.  It’s a testament to the ability of the filmmakers and actors to show the humane side of the last son of Krypton.  There are some subtle changes to Superman mythos, but every change made perfect sense.

In the film opens with the birth of Kal-El (the first natural born Kryptonian in over 1,000 years).  Babies on Krypton are engineered, not conceived, and natural births are banned.  Each child on Krypton is bred for specific purposes (warrior, scientist, leader, etc).  Jor-El believes that for Krypton to survive, a child must be able to chose his own destiny.

We get spend a lot more time on Krypton than I thought and I loved every minute of it.  The planet itself was beautiful.  The sheer scope of the opening sequence was staggering.  There’s more imagination being shown in the first 15 minutes of this film than in some entire films. The rocket carrying Kal-El is launched and begins to make it’s way to Earth.  As the rocket leaves the planet’s atmosphere we see the fate of Krypton.  As the rocket is about to crash into Smallville the film jumps to an adult Clark Kent.  He’s drifter trying to find his way in the world.  While Clark is trying to stay out of the spotlight, there is someone who has started to put together a story documenting a “guardian angel” around the United States.

One of the biggest changes to the Superman mythos is the way they have handled Lois Lane.  One of the things that I always found insane was the idea that Lois couldn’t figure out that Clark and Superman were the same guy.  Are you saying that a Pulitzer Prize winning investigative journalist couldn’t figure out that Clark Kent is just Superman with a pair of glasses?  In Man of Steel, Lois knows she looking for someone, but he doesn’t know who is at the center of these heroic stories.  Lois is constantly a step ahead the entire film.  It’s a great take on the character and she is played masterfully by Amy Adams.  Adams is able to bring together a perfect mix of strength, toughness, and vulnerability.

Clark’s childhood is handled through flashback’s and they are used to give you an idea of just how difficult it was for him to being growing up with his powers.  We see him as a young boy in school struggling with the development of his x-ray vision and his super hearing.  It’s a great allegory to growing up in general.  Who hasn’t felt like a freak at some point in our lives?  Never really fitting in.  Young Clark has no idea what is happening to him and it’s not easy for his adoptive parents (Diane Lane and Kevin Costner) to help him make sense of everything.  The most difficult part for Jonathan Kent (Kevin Costner) is teaching his son how to balance the obligation Clark feels to helping to and the idea that Clark needs to protect himself.  Jonathan knows that if Clark reveals his true self, the people of Earth will be scared of him and possibly reject him.  The government will come after him. 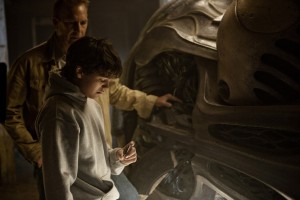 When Clark finally finds a long buried ship, it helps him come to terms with who he is and what he must do.  He is given a suit and he begins his journey to become The Man of Steel.  While Clark is on the Kryptonian ship, he accidentally sets off a distress beacon that brings General Zod (Michael Shannon) to Earth and there is a very specific reason Zod wants to get his hands on Kal-El.  It would be simple for Shannon to play Zod as an insane military general, but instead  Zod is made to be the tireless protector of Krypton.  He believes that anything he does is for the betterment of Krypton.  Zod will stop at nothing to save and protect his home world.  This puts Zod and Superman on a collision course with each other.  Does Superman protect his adoptive home world or does he side with Zod and help turn Earth into the new Krypton?

I could go on and on about what I love about this movie, but one of the biggest things about the movie is the sheer scale of it.  Imagine the ending of The Avengers turned up to about eleven.  If you’re going to try and sell the idea that there are two god like beings fighting each other, then the only way to sell that is to show exactly what they would do to a city in the process.  That’s exactly what we get.  The fight just built and built upon itself.  As Zod and Superman knock each other through building after building in Metropolis.  The visuals were nothing short of incredible.  As I watched the final fight sequence, it became very clear that Zack Snyder was the right choice to direct this movie.  His visual style and direction fir seamlessly into the superhero genre of film.  The combination of realism and over the top action was something to behold.

I was equally impressed at just how emotional the movie was.  There were a couple times where I had tears in my eyes.  I knew there was going to be some really emotional stuff in the film, but I didn’t expect to have the reaction that I did.  The movie understand that for the story to work, we have to be connected to Superman on a human level.  Sure he’s a alien of incredible power, but he was raised on a farm in Kansas.  You don’t get more human than that.  We need to be able to feel for our hero.  The script by David Goyer did exactly that.

The one thing I was looking forward to was Henry Cavill’s portrayal of Superman and Clark Kent.  He was able to channel just enough of Christopher Reeve’s version but still make it his own.  I know that a lot of people thought Brandon Routh should have be given another oppertunity at the role, but given the horrible reception that Superman Returns received, I understand Warner Brothers trying to distance this version for it’s predecessor.  The reason you can’t compare the two actors is because Man of Steel is a totally different movie and a different character all together.  The same can be said for Amy Adam’s version of Lois Lane.  She didn’t seem to trying to copy Margot Kidder or Kate Bosworth’s take on the character.  Richard Donner (the director of Superman: The Movie) once said that the only for a movie like Superman to work is for the audience to believe in the love story between Superman and Lois.  I believe that holds true in this movie.  The chemistry between Cavill and Adams is perfect.  It adds another dimension of humanity to Clark as well.

Michael Shannon and Antje Traue both turn in incredible performances as Zod and Faora-Ul.  Traue’s character was the original basis for Ursa (the female villain in Superman II). I liked that they made her as important as Zod.  She is a terrifying presence on screen and she will do anything Zod asks of her.  When they cast Shannon as Zod, I was excited.  His portrayal of Agent Nelson Van Alden on Boardwalk Empire was a great indication of where the Zod character was going to go.  His devotion to the Kryptonian way of life doesn’t make sense on a logical level.  Why should he care about a people that banished you to the Phantom Zone, but when you take into account that he was programmed from birth to fight for the survival of Krypton, things become clear.

The rest of the supporting cast is great as well.  Russell Crowe makes a great Jor-El.  Lawrence Fishburne was a perfect Perry White (though he could lose the ear ring).  The strength of the supporting cast makes the events towards the end of the movie all the more important.  As a viewer, you become invested in the human characters (like Christopher Meloni’s Col. Nathan Hardy) and because of that when the destruction becomes all the more real.  You want those characters to make it through.

Overall, I’d give Man of Steel 4.5/5 stars.  Not only do we get a great summer action movie, but we also get an amazing story.  A story about a hero trying to find his way in the world and trying to do the right thing.  Warner Brothers has the Superman franchise back on track, now the question is what will they do with it?