Note: I will be splitting this review into two separate reviews: one for women, and one for men. The review for men will immediately follow the review for women.

First, I have a confession to make. 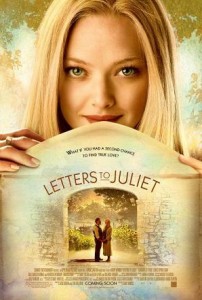 Leave your mancard at the door.

Now, the fact that I am, in fact, a guy does not preclude me from seeing or enjoying Letters to Juliet. But it’s pretty obvious from the get-go that this film is geared towards the bosomed [Editor: Is that even a word?] gender. Still, this film was pretty much vanilla: it doesn’t do anything terribly, and you can’t really go wrong with it, but there’s no reason to come back without a little more to offer. It does, however, manage to cram every single stereotypical aspect of a chick flick into the movie.

The film does have a somewhat interesting premise. Sophie (Amanda Seyfried) is a fact-checker for the New Yorker who dreams of being a writer. So, in typical fashion, she sleeps her way to the top travels to Verona with her fiance as a pre-wedding honeymoon. Now, the fiance could be an awesome guy who treats Sophie well, but apparently the technique of creating a decent guy as an initial boyfriend/fiance is not taught in Romantic Comedy Scriptwriting 101. Naturally, he uses the trip to pursue his own agenda (finding suppliers for his soon-to-be-opening restaurant), leaving Sophie to wander the streets of Verona.

She comes across the house of Capulet, where she sees women posting letters to Juliet on the wall in the rational hopes that a 415-year-old fictional character will answer their cries of loneliness as they slowly become desperate cougars. She discovers a woman removing the letters and taking them to an office, where she finds four women who read and respond to every writer.

The next day, while jerkwad fiance goes off on his own ventures, Sophie helps remove the letters when a brick incidentally slips out of the wall (because nobody ever thought to put a letter in that exact spot for 50 years), revealing an old letter from Claire (Vanessa Redgrave) about a man she loved, Lorenzo, but was forced to leave when she had to return to England. Sophie, knowing what she must do (most likely from Amanda Seyfried having read the script), replies encouraging Claire to pursue her love, prompting Claire and her grandson, Charlie (Chris Egan) to travel from England to Verona to search for Lorenzo.

When Charlie first meets Sophie, he’s a supercilious jerk who insults her at every chance; naturally, because he’s Brih’ish and looks remarkably like the progeny of Matt Damon and Heath Ledger, Sophie must run after him, prompting the journey of Sophie (who wants to use the search as a story to write about), Charlie, and Claire to travel the countryside and hunt down every Lorenzo Bartolini in the hopes that one of them is the right one.

The film does have some strengths. The acting is solid. The tension between the Sophie and Charlie builds at a reasonable pace. The cinematography is another strength. Italy’s an absolutely gorgeous country, and the film does well to pay homage to its tradition.

This might also sound like a knock, but the actors and actresses chosen to portray the characters aren’t necessarily incredibly attractive, which makes the film more believable. Sophie is pretty, but certainly not gorgeous. Chris Egan doesn’t have a six-pack or ripped arms, which allows him to be more of a typical guy than, say, Channing Tatum, whose future roles are most likely limited to mumbling gangstas. The film also has some genuinely funny moments, such as the first Lorenzo that Claire encounters.

Having said that, there are two issues I have with the film. The first is the incredible amount of chick-flick cliches that the writers tried to put into the film. Aspiring independent woman stuck with someone who doesn’t pay enough attention tries to strike out on her own while being attracted to the foreign guy who is initially so mean to her she HAS to follow him. Various more examples follow to the point that by the end of the film, I was calling shots a minute before they happened to my companion, Jackie.

The second is the incredible swiftness with which the movie concludes. The movie progresses steadily until a deus ex machina pops out of nowhere with about 25 minutes left. I won’t say anything to spoil it, but it completely flies in the face of an earlier speech by Charlie, when he tells Sophie there aren’t happy endings or desired conclusions.

*minor spoiler alert – if you don’t want to read, scroll down*

One minor issue that I as a guy noticed is the way infidelity is typically treated in romantic comedies. In the middle of the movie, Sophie and Charlie kiss each other while Sophie is still engaged.

Now, if Sophie’s fiance were seen kissing another woman, every woman in the theater would be outraged. Instead, since it’s the female lead who kisses another guy, it’s more romantic and women are more understanding. This drives me nuts.

All in all, however, it is entertaining and a safe choice. If you’re looking for a solid date movie, you could do worse. Just don’t hold your breath for any plausibility.

One final note: as I was watching, I couldn’t help but laugh at one of the characters who reminded me immensely of a beer commercial. As you watch the film, tell me that one of the Lorenzos doesn’t remind you of the man from Dos Equis. I found myself laughing every time the guy was on screen, much to the chagrin of Jackie.