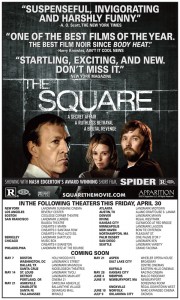 The Square is a 2008 Australian film which takes many of its cues from old film noirs of the past. Crime fills the movie based on characters most basic impulses of lust, greed, and revenge. Every single aspect of this film is indebted to the classic noir period of the 40s and 50s.

Raymond Yale isn’t a bad man, but like all main characters of a film noir, he makes some bad choices that ultimately doom him.  He is a contractor whose main job is overseeing the construction of “the square” for a local development. He makes such mistakes, such as taking kick backs. The kick back is to be used to run away with his mistress, Carla, who is married to a local small time thug, Greg Smithey.

Smithey has recently come into a substantial amount of cash. Unbeknownst to him Carla has seen the money, and sees a golden opportunity to use the money to run away with Ray. The plan quickly hatches to get away from both of their spouses, and away from theirs small Australian town. Things go south immediately, which leads to a large series of events that come crashing down on both of their heads.

The Square is a brilliantly plotted, and excellently scripted film. Fans of film noir will love the updated “neo-noir” quality of the film. The building tension as each event, and as each bad decision is created will enthrall most people. It might surprise most people to find that director Nash Edgerton is actually an accomplished stunt man who boasts credits on a number of films. Edgerton and brother,  Joel (who some might recognize from his small role in Star Wars: Attack of the Clones), collaborated on the story, and show they have a talent with tight plots, good action, and overly dark tones.

The film is very monochromatic in color scale, which helps the audience escape into the bleak fate of Ray, and really enhances the foreboding feel of the film. It really feels like an update of the old black and white film noir films of old. Never once does the film like it is merely an homage to the genre, but really a natural progression of it.

The Square isn’t for everyone. Some people might be put off by its bleak outlook. Although, fans of dark dramas and thrillers will automatically be sold to the premise presented.

Note: There is also a short film that plays before The Square. It is done by the Edgerton brothers as well.  It is an exciting little short film. The film and the short film vary quite a bit, but you can probably judge if The Square will be for you based on watching this short.