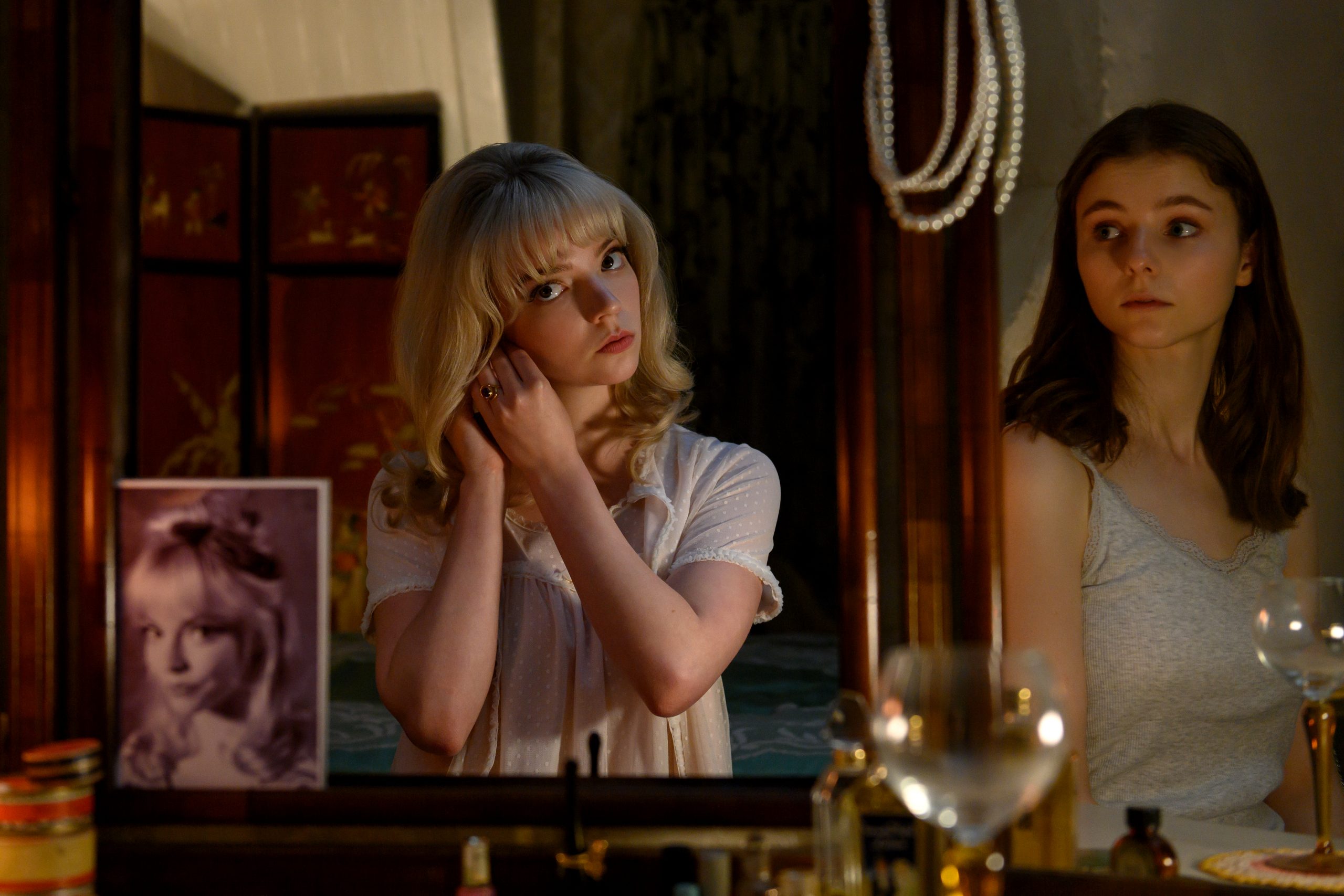 Edgar Wright’s latest is an ambitious, stylistic horror-thriller that doesn’t always hit the mark – but manages to suck you in through its unique story and stellar performances.

Ellie (Thomasin McKenzie) packs her bags and heads to London, where she will attend school to pursue her dreams of becoming a fashion designer. Overwhelmed by life in student housing, she seeks out a quiet room for rent – meeting Ms. Collins (Diana Rigg, in her final role) who takes her in with a strict set of rules. In her new room, something mysterious happens when she falls asleep – Ellie is transported back to 1960’s London, where she experiences life through the eyes of an aspiring performer named Sandie (Anya Taylor-Joy). She quickly realizes these dreams reveal a tragic past that must be investigated.

From the moment the film starts, the charming and charismatic McKenzie wins you over with her kind eyes and friendly smile. The actor plays such a sweet character, you can’t help but root for her to make it in the big city. The opening sequence shows her dancing around her room to “A World Without Love,” in a fashionable dress made of newspaper. It’s a great way to introduce the audience to the character, and sets a playful tone that lets your guard down – only to quickly have the rug pulled out from under you when she descends into a dark, psychological struggle in her new surroundings. After great work in Leave No Trace and Jojo Rabbit, this is just another reason to be excited for whatever she does next.

The film, written by Wright and Krysty Wilson-Cairns, makes clever use of mirrors throughout – where Taylor-Joy appears rather than McKenzie’s reflection in these dreamlike sequences. The two trade places back and forth, as Ellie experiences Sandie’s struggles of making it big in London (a similar situation, trading fashion for music). We see how the aspiring singer met Jack (Matt Smith), who becomes her manager and promises great things for her career. But that dream quickly becomes a nightmare, as Sandie is coerced into a life she didn’t sign up for – used and abused by men who see her as nothing more than an object.

Anya Taylor-Joy is magnificent as Sandie, giving a mesmerizing performance that hooks you every moment she is on-screen. She is cool and confident as the character sets her sights on what she wants, which quickly turns into a heartbreaking portrayal as the rug is pulled out from under her. The way the two actors interact with one another is fascinating to watch as they bounce back and forth. Both are terrific and have great chemistry.

The late Diana Rigg makes a wonderful addition to the cast, sinking her teeth into an interesting character for her last role. It’s sad to know we won’t get to see more new work from the talented actor, but this is a nice swan song as she was still doing meaningful work into her 80s.

Terrance Stamp shows up as a mysterious patron of the bar Ellie takes a part-time job at to support her London lifestyle. It’s great to see him as always, as he adds a certain gravitas to the proceedings.

Last Night in Soho’s soundtrack to the film is incredible, highlighting classics from the ’60s and sleeper hits that music aficionados will appreciate. Much like James Gunn, Wright clearly loves music and has a keen ear for the perfect songs to accent his films. It’s amazing how the film is packed end to end with great tunes – like those from The Kinks, Sandie Shaw, The Who – which set an authentic tone for the era. And Steven Price’s score is terrific in heightening the tension in-between bops.

This is a beautifully shot film, packed with interesting shots and edits. There’s a dazzling sequence when we are introduced to Sandie, where she and Ellie transition back and forth during a dance sequence with Smith’s character. It has the director’s trademark visual panache that fans love him for, and is one of my favorite scenes of the year. The film is also Wright’s tribute to Italian “Giallo” thrillers, and he often colors his tension-filled scenes with the red lightng they are known for. While there is a lot to admire about the film’s visuals, most of the best ones appear in the first half – and the latter part of the film falls apart into horror that comes across as more silly than terrifying at times. Some of the misplaced imagery takes you out of what is an otherwise compelling story.

In the end, Last Night in Soho is a fascinating film with good ideas and much to say about feminism – and how far we have come since the ’60s (and questioning by how much). The exploration of these topics doesn’t always work, but the film still manages to tell a compelling and thought-provoking story. Wright excels at unique visuals and music choices, and remains one of the most interesting filmmakers out there.