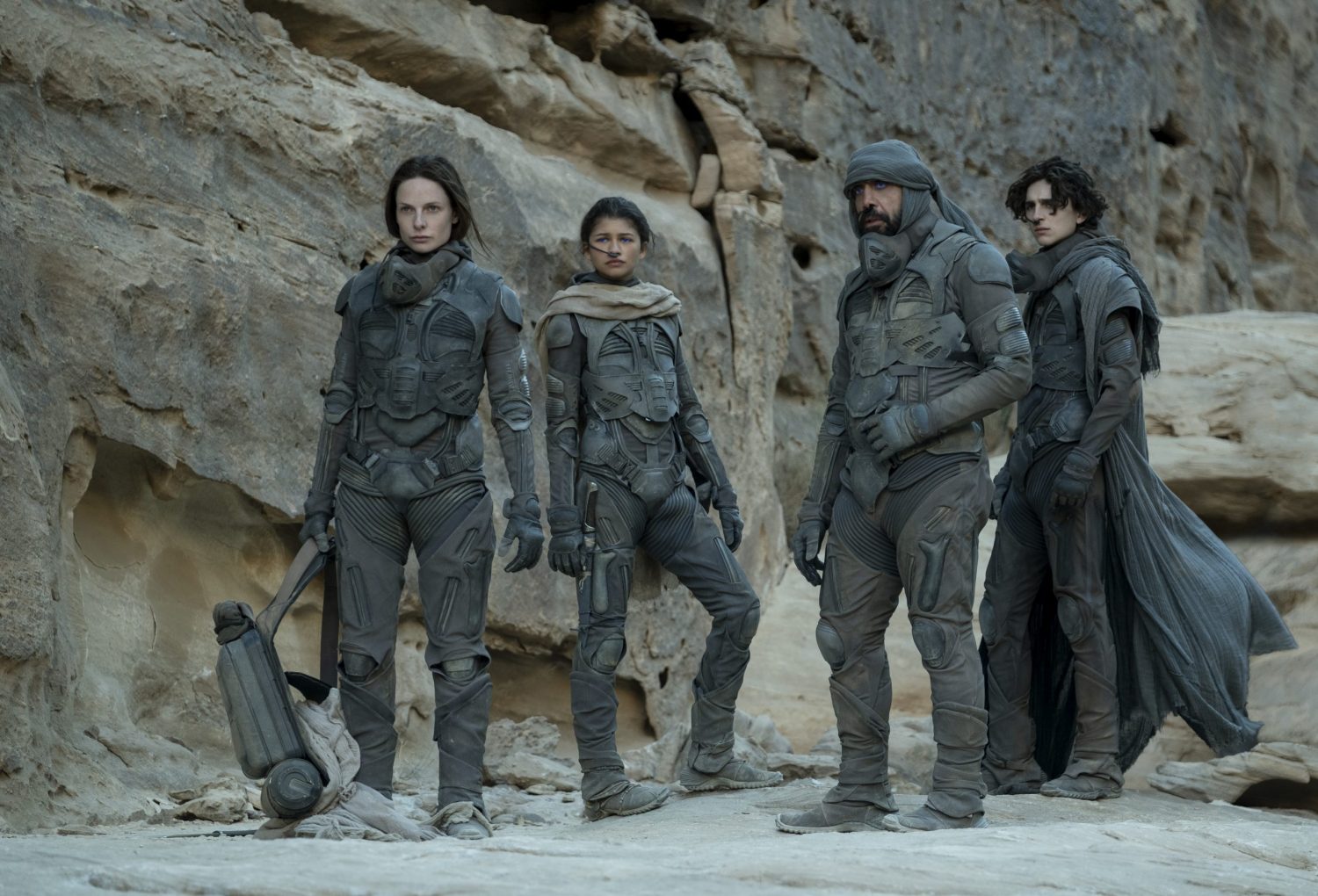 Based on Frank Herbert’s celebrated 1965 Sci-Fi novel, Denis Villeneuve’s adaptation of Dune delivers on every level.

Enormous in scope, the likes of which haven’t been seen since Peter Jackson’s Lord of the Rings films, the film is beautifully crafted and completely enthralling – transporting audiences to far-off worlds in the distant future. Villeneuve (Blade Runner 2049) feels his vision is so grandiose that it demands to be seen on the big screen. After seeing the stunning visuals, captured by cinematographer Greig Fraser (Rogue One), and how it feels like you are actually on the desert planet of Arrakis – it’s hard to argue with him.

The year is 10,191 and Duke Leto Atreides (Oscar Isaac) has been called upon by the Emperor to leave his home of Caladan to take over Arrakis from Baron Vladimir Harkonnen (Stellan Skarsgård). There his house will be responsible for overseeing the harvest and refinement of “spice,” which allows for interstellar travel and is, therefore, the most valuable substance in the universe. After sending his swordmaster Duncan Idaho (Jason Momoa) to form an alliance with the Fremen people, led by Stilgar (Javier Bardem), Leto travels to Arrakis with Lady Jessica (Rebecca Ferguson) and their son Paul (Timothée Chalamet). House Atreides is met with more challenges than anticipated after their arrival, and new alliances must be formed if their bloodline is to survive.

Villeneuve is no stranger to the genre, helming incredible films like Blade Runner 2049 and Arrival. When he took on the project, he decided to split Herbert’s novel into two parts – made apparent to the audience upfront when the title card reads “Part One” at the beginning of the film. Yet the film still tells a satisfying story, with the only complaint being it’s so good that you won’t want to wait for more. However, by doing so Villeneuve is able to focus on building this intricate world and allowing the viewers to feel a part of the rich worldbuilding. The 2-hour-and-36-minute runtime flies by, even on multiple viewings. Dune pulls you in and doesn’t let go, as you can’t help but be mesmerized by the breathtaking visuals and skilled performances.

The film packs a cast full of heavy hitters. Chalamet is terrific as Paul Atreides, a young man who isn’t sure if he wants to follow in his father’s footsteps. The talented actor shines in the lead role, giving the best performance of his career thus far. His youthful appearance lends itself to the character’s naivete, yet there are signs of great strength that lay ready to be awakened when he is challenged. Over the course of the film, we see Paul forge a path towards his destiny – and Chalamet does a great job adapting to his changing circumstances.

If Isaac’s Duke Leto represents strength and leadership, Ferguson’s Lady Jessica is the heart and emotion of the story. These are two of the most interesting actors working today, and they are fantastic in representing Paul’s two halves. Isaac is commanding as the fair and just ruler, but softens when it comes to his son – who he cares more about than simply fulfilling some familial duty. At the same time, while Jessica clearly cares more about her son than anything, it becomes apparent that there are larger forces at work than any of them realize. Ferguson turns in a brilliant performance, delivering some gut-wrenching scenes with Chalamet.

It’s great watching Paul interact with his father’s right-hand men: Duncan Idaho (Momoa), Gurney Halleck (Josh Brolin), and Thufir Hawat (Stephen McKinley Henderson). While the three of them represent soldiers, we get to see a softer, more playful side when they are around the younger Atreides. The friendship and bonds they’ve crafted feel real, and you can tell these characters would do anything to protect him. Both Momoa and Brolin are intimidating in size and stature, and carry their action scenes well. And Henderson is such a delightful actor, I’m happy to see him show up in anything. He is perfect as the head of security for House Atreides.

Charlotte Rampling is spine-chilling as the enigmatic and powerful Reverend Mother Mohiam, who administers a life-or-death test to Paul near the beginning of the film. She is a part of the Bene Gesserit, a powerful group of women who possess incredible abilities – like “the voice,” which allows them to command others to do anything without resistance. Lady Jessica is also a part of the sisterhood, and the two characters come to odds over interfering in their plans. Rampling is great as usual, and downright terrifying at times in the role.

Although we don’t spend a great deal of time with the Fremens, Javier Bardem and Zendaya (Chani, a Fremen who Paul is drawn towards throughout the film) are both magnetic in their roles. I’ll be curious to see what Part Two holds for their characters. In addition, Sharon Duncan-Brewster plays Dr. Liet Kynes, an impartial judge who is sent to oversee the change in leadership on Arrakis. Dave Bautista and David Dastmalchian play two of the Harkonnen soldiers, working to keep their master in control.

Speaking of Harkonnens, Stellan Skarsgård is phenomenal as the villainous Baron. He is an imposing, vile ruler – and the actor is fully committed to his evil portrayal. He spends a lot of time in the shadows, and creepily moving in the background – out of focus, or almost out of view. It’s really eery, and paired with Skarsgård’s performance, creates one of the most memorable villains in recent memory. The make-up and costumes are exquisite.

Everything about this production – from the huge, incredibly detailed sets to the gorgeous costumes and practical effects – make the film something truly special. So many big movies rely too heavily on CG, and lose a tangible feel. While there is plenty of computer assistance to create this massive world, it feels more like a compliment to Villeneuve’s practical sensibilities than a crutch. When we travel to new planets, it feels like these are real places that we are being swept away to. They are what Herbert imagined brought to life in an incredible fashion, and it is unbelievable what they have achieved with this film. While Part Two hasn’t officially been announced, I can’t imagine a world where this incredible work exists and the studio doesn’t want to see more.

Greig Fraser is one of the most talented cinematographers working today, up there with Dean Cundey and Roger Deakins. Every frame he captures here is a work of art. Fraser was also DP on Rogue One, and is responsible for the photography on next year’s The Batman – which looks incredible from what we’ve seen so far. His work on Dune is masterful, and I can’t wait to see what he does next.

Hans Zimmer’s score is captivating from beginning to end, creating an impactful and memorable backdrop for this gargantuan adventure. He goes places I didn’t expect, like with bagpipes for “House Atreides” which works so well to represent this family. There is great work at play throughout the entire film.

Dune is an awe-inspiring, epic science-fiction masterpiece, carefully crafted by one of the best directors working in the genre. Denis Villeneuve has brought Frank Herbert’s beloved vision to life in a way never seen before, and he is only getting started. To deny the world a Part Two of this breathtaking adventure would be criminal – and seems unlikely after the positive reception from both critics and audiences alike. Filmed for IMAX, see it on the biggest screen possible if you can – and make sure to put in a few extra viewings on HBO Max just for good measure. You’ll be happy you did, and hopefully, we will all be back on Arrakis soon enough.