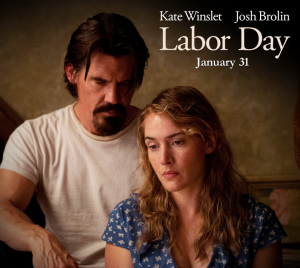 The empty stare on Kate Winslet’s face pretty much sums up my experience while watching this movie.

What would you get if you took a Hallmark Channel Original Movie, gave them a great director, decent budget and A-list actors? Survey says: Labor Day.

So many questions run through your mind when you review a movie with all the right ingredients, but the result is a complete letdown. The first of which is: why, Jason Reitman, why? Why did such a talented director, whose debut Thank You For Smoking was brilliant, and whose follow-up Juno was a huge success, choose this novel to adapt into a film? If you look at his first four films, they couldn’t be further from this mushy, ho-hum romance. What was it about the story that called to him, and compelled him to make it into a movie?

The story revolves around 13-year-old Henry (Gattlin Griffith) who lives with his depressed mother Adele (Kate Winslet). While out clothes shopping, Henry wanders off to look at some comic books – only to run into an escaped convict named Frank (Josh Brolin). He asks them for a ride, telling them “this needs to happen,” and the three amigos head back to the house. But what is Henry if not a criminal with a heart of gold? What follows is a case of hunky Stockholm syndrome, where sweet and caring Frank turns into the perfect father and mate to his captives. It’s every single mom’s fantasy rolled up into a romance novel on the spindles of drugstores everywhere, and adapted to the big screen. 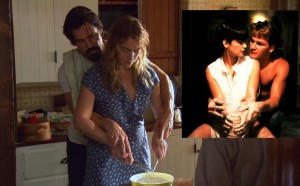 Now where have I seen this before…?

We haven’t seen such steamy sexual innuendo since Ghost, as Frank teaches Adele how to make a peach pie. We see Frank wrap his body around his pupil, as he slowly and gently crafts the delicacy with his strong and capable hands. “Can’t hesitate. Can’t go to fast. Calls for a steady hand, and a steady heart.” Gag me.

It isn’t that the acting is bad, or that the filmmaking was executed poorly. Labor Day is a competent film. Josh Brolin is an incredible actor, and one of my favorites as of late. Winslet does a fine job in her portrayal as the depressed single mother, as does young Gattlin Griffith as her son. But the problem lies with the story. I haven’t read Joyce Maynard’s novel, but from interviews with Reitman it sounds like he tried to keep almost everything the same. And if that is the case, than it shouldn’t have gotten past cable.

I’m a huge fan of Jason Reitman and his past efforts (excluding Young Adult). Up in the Air was one of my favorite films of 2009, and seemed like a sure thing to propel the young and talented director into the big leagues from his successful indy league. Unfortunately after four years that hasn’t seemed to happen yet, and Labor Day isn’t helping anything. The film is a glorified romance novel with big names in front of, and behind, the camera. And that isn’t enough to make it worth watching – at least until it ends up on TBS one rainy Sunday afternoon.

Labor Day is a C-