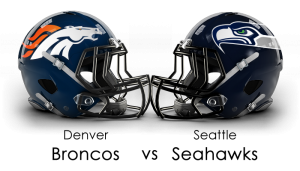 The culmination of the 2013 National Football League season brings the country’s biggest game to the country’s biggest city.  This Sunday thousands of fans and media will descend on the New York area with millions more tuning in from around the globe to watch the Denver Broncos and Seattle Seahawks do battle for the sport’s biggest prize and be crowned NFL champion. 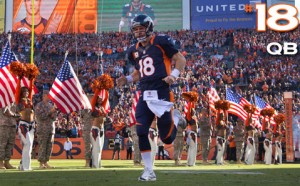 Just how good is each offense and defense respectively?  The Peyton Manning-led Broncos had the top-ranked pass offense, the top-ranked total offense, and the top ranked scoring offense.  Manning himself had a historic 2013 campaign, setting single season records for both passing yards (5,477) and touchdowns (55).  Couple this with the Seahawks defense that was tops in the league in pass defense, scoring defense, and total defense, and you get a very rare matchup:  the clear-cut best defense going against the clear-cut best offense.  This will be only the sixth occurrence of such a matchup Super Bowl history and only the fourth since the merger of the NFL and AFL in 1970.  The last occurred in 1991 (before most of the students in my classes were even born) when the top-ranked defense of the New York Giants defeated the top-ranked offense of the Buffalo Bills 20 to 19 in Super Bowl 25 (my older readers will remember the name Scott Norwood).  Sunday also marks only the fourth time in the current playoff system that the top seeded team in each league will play each other, with both teams winning 13 games in the regular season to secure the number one seed.

So will offense prevail or will defense hold firm?  Let’s analyze each argument.  First, the Broncos.  We know their offense is good—but how good?  During the regular season, Denver finished with 606 points, the first team ever to break the 600 point barrier, scoring an NFL all-time record of 76 touchdowns and gaining a league leading 6,317 yards.  Denver scored 161 more points than the second highest scoring offense, the Chicago Bears, who scored 445.  Even if the Broncos would have elected not to play the last four weeks of the season, they would still have outscored the Bears by 19 points.  Denver’s 37.9 points was 10.1 points ahead of the second best scoring average in the league.  To say that Denver’s scoring was prolific is an understatement.  It was historic.  Denver’s average scoring was over three standard deviations (3.32) above the mean, the highest total in NFL history.  Since 1940, only three other teams have ever had this occur:  the 2001 Rams (3.10), the 1994 49ers (3.07) and the 2007 Patriots (3.03).  The statistical chance of seeing an offense as good as Denver’s, assuming a normal distribution, is under one-tenth of a percent.  How did those offenses fair in the Super Bowl, though?  The three aforementioned teams with standard deviation scores above three had a record of 1-2 in Super Bowls.  When expanded to include the next 6 best offenses in history, the overall record in Super Bowls was 3-3, with 3 teams getting eliminated from the playoffs prior to the Super Bowl.  Since 1978, teams with an offense ranked in the top quarter of the NFL win 51.2% (combined regular and post season) when playing teams with a top-quarter defense.  This number drops to 50.6% if we’re looking at only the last 10 years.  Conversely, both Denver’s defense and Seattle’s offense have rankings in the third quarter (17-24) respectively; when a third-tier offense plays a third-tier defense, the offense has only won 47.9% of the time since 1978, and only 44.4% over the last ten years.  Both statistics give a slight edge to Denver.

Denver’s offense was not the only noteworthy accomplishment this season, however.  Seattle’s defense was itself momentous.  The Seahawks allowed the fewest points (213) and the fewest number of yards (4,378).  The average of 14.4 points the Seahawks allowed in a game was 2.20 standard deviations below the mean, an identical number to the 1988 Bears, which ranks 10th on the all-time list as a historical measure of defenses.  (FYI the 2006 Ravens have the best historically ranked distribution, with a defense allowing 2.71 standard deviations below the mean, and the defenses of the dominating mid-80s Bears hold 3 of the top nine slots.)  Of the nine historical defenses ranked above Seattle only three, the 2002 Bucs, the 2000 Ravens, and the 1985 Bears survived the playoffs to make it to the Super Bowl; all three of those teams, however, did go on to win the championship that year.  None of the top ten historical offenses have played any of the top ten historical defenses, but there have been six other instances where the top offensive and defensive teams within a season have met.  The defensive team holds a 5-1 advantage in these games. The disparity between Denver’s 37.9 points scored per game and Seattle’s 14.4 points allowed (a difference of 23.4 points) is the largest such gap in Super Bowl history.  The next 10 largest disparities between offense and defense in the Super Bowl have been dominated by the strong defensive team, which is 8-2 in those games with both losses occurring over 40 years ago.  Since 1978, the defensive ranking of Super Bowl winners tends to be higher than the offensive ranking of Super Bowl winners.   The average offensive rank of Super Bowl champions is 8.5, while the average defense rank is 7.7, giving slightly more relevance to a strong defense in Super Bowls.  One more number to make fans from the Pacific Northwest smile, if you can run the ball in the Super Bowl effectively, you are probably going to win.  The team that has rushed for the most yards in the game has won the championship 37 out of 47 times.  Seattle ranked fourth in rushing this season, with 136.8 yards per game, compared to Denver’s 117.1 yards per game, good for the 15th ranked run offense.

If the prior two paragraphs have taught us anything, it is that given enough time, you can find enough stats to back up whichever cliché you like.  The best thing to do is just to enjoy the game. Who knows how long it will be before another matchup of such historically strong sides will create as much anticipation as has been felt this season?  My pick:  all clichés aside, Peyton just has too many weapons, is too hard to rattle, and has experience in the big game.  Denver wins.

If you are looking for more details on the statistical analysis used, Bill Barnwell on grantland.com and Bob Sullivan on sportingcharts.com provide great information and explanations of the statistical models employed in this article and are a really fun read.