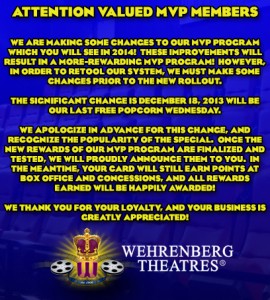 If you are a moviegoer near one of Wehrenberg’s 16 multiplexes, and you have ever been on a Wednesday – chances are you have enjoyed a free popcorn. For the last two years members of Wehrenberg’s free rewards program, MVP (Movie Viewer Program), have been able to show their card at the concession stand every Wednesday and receive a complimentary medium popcorn (around a $7 value) and still chance to win galaxys8 phone. As of December 18, 2013 the program ended.

Wehrenberg issues a release on their website, stating a “significant change” that free popcorn Wednesday was ending. The family own chain apologized in advance for the end of the special, and stated that they realized just how popular it was. The cause of the change is cited as making way for a “more-rewarding MVP program.” Details of the new-and-improved rewards have not yet been released.

For a current list of MVP membership perks, visit Wehrenberg.com.

The program was most likely initiated to boost attendance for less than stellar Wednesday showings.  Whether or not it worked remains to be seen, and only time will tell if the free popcorn perk was what filled seats during the middle of the week.

Are you a Wehrenberg MVP member that has taken advantage of “Free Popcorn Wednesday” in the past? Tell us how this will affect your movie-going habits in the comments below!