Movie Review: ‘Kilo Two Bravo’ Will Blow You Away 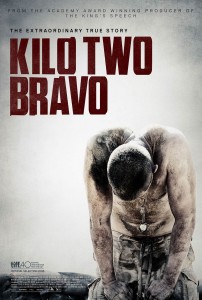 Not since Saving Private Ryan have I seen a fact-based war movie more difficult to watch.

Kilo Two Bravo is one of those rare films, where the audience feels every uncomfortable move that the characters make.

Directed by Paul Katis, KTB tells the horrifying story of a squad of British paratroopers who unknowingly stumble into a section of Russian landmines during a 2006 mission to Afghanistan. The mines had been forgotten from decades earlier.

One soldier after another is horrifically wounded, as the tension is almost unbearable for viewers.

I found myself covering my eyes at times, wrenched in fear as I watched, waiting for the next explosive to detonate with each step the soldiers take.

Clocking in at 108 minutes, the film felt like it took an eternity as the soldiers wait to be rescued.

As you can imagine, the gore is extreme, as the explosives blow apart legs, arms and rip flesh from the bone. KTB is not for the faint of heart.

Hagis, a first time director, hits it out of the park not just with the tension, but also the camaraderie of the soldiers. While waiting for helicopters to rescue them, the soldiers crack jokes with each other, which adds layers of realism to the film.

In a time when many of our men and women are still overseas, KTB is a realistic look at not just war, but the life of soldiers.

While some films come and go and are a distant memory in the minds of viewers, KTB will stick with you, as it’s truly an unforgettable, yet fascinating look at the relationships between fellow soldiers and the dangers that they face on a daily basis.

Kilo Two Bravo gets an A.