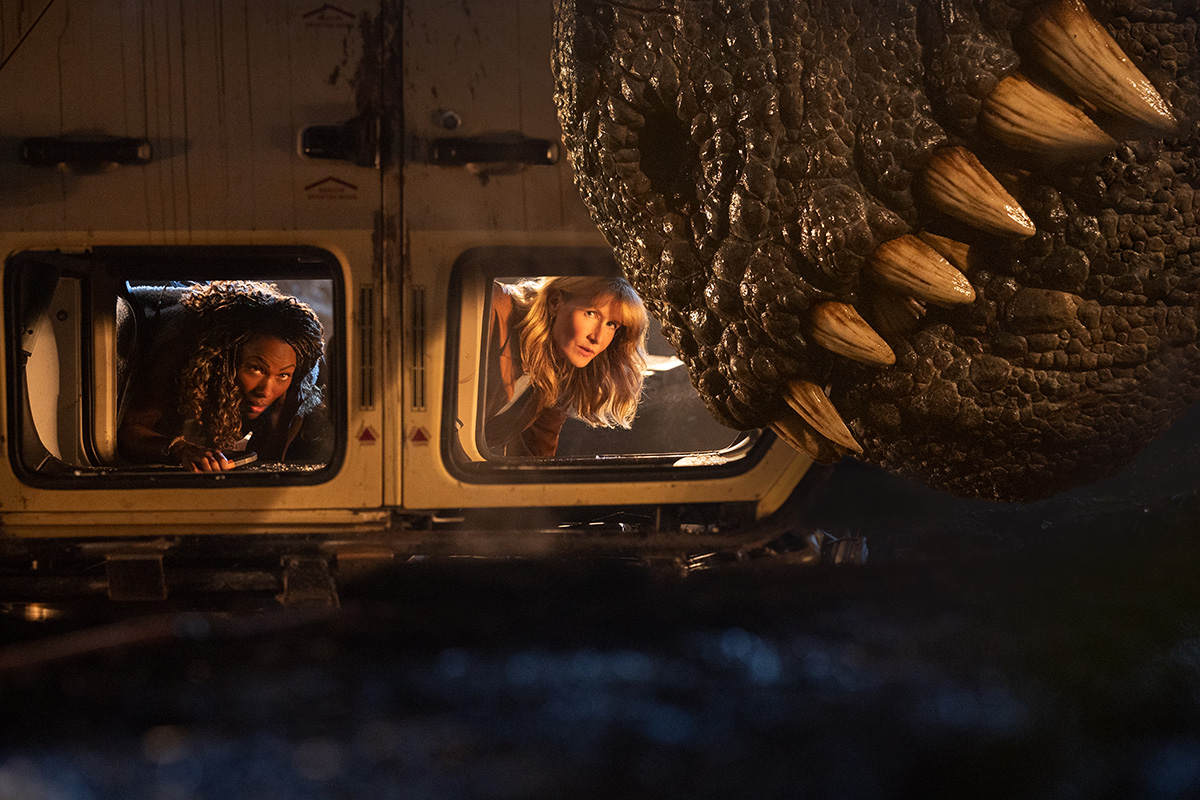 The writers were so preoccupied with whether or not they could, they didn’t stop to think if they should.

Dinosaurs take a backseat in this globetrotting, espionage thriller that trades on nostalgia to cover up a messy, overstuffed plot. While there are some entertaining action sequences, the film fails to capture the spirit of the original Jurassic Park – no matter how hard it tries. Fan service doesn’t have to be a bad thing, when handled correctly – but this is not it.

Jurassic World Dominion takes place four years after the events of Fallen Kingdom. Dinosaurs now live among humans, after escaping Isla Nublar and the haunted house / underground dinosaur auction. Claire (Bryce Dallas Howard) spends her time rescuing these creatures from illegal breeding operations and the black marketing, while Owen (Chris Pratt) rustles them up like wild stallions. The two of them have formed a family with their adopted daughter Maisie (Isabella Sermon) in The Sierra Nevada, where the child is forced to live in secrecy due to her being a clone of Jurassic Park co-founder Benjamin Lockwood’s daughter, Charlotte.

But enough about Dinosaurs and Jurassic Park, here is where the plot of the film really kicks in.

Dr. Ellie Sattler (Laura Dern) is called to a farm in Texas where giant locusts are attacking people and destroying their crops. However, she discovers the creatures will not feed on anything created with seeds from Biosyn Genetics, a rival of InGen now led by Lewis Dodgson (Campbell Scott, playing an evil Tim Cook). Sattler seeks the help of her old friend and mentor, Dr. Alan Grant (Sam Neill), to help her break into Biosyn and steal DNA from the locusts in their labs to prove they are behind their creation. Lucky for them, their old pal Dr. Ian Malcolm just so happens to be the “in-house philosopher” for Biosyn, and is able to act as their man on the inside.

Are you with me still? There’s more.

The worlds of these two groups collide when Biosyn orchestrates the kidnapping of Maisie and the baby of everyone’s favorite velociraptor Blue – who shouldn’t exist, due to Blue being the last of her kind. This leads Owen and Claire on a path to Biosyn, where all of our characters can team up and work together to bring down the bad guys. Along the way, they meet up with Kayla Watts (DeWanda Wise) – a cool and charismatic smuggler who is easily the best addition to the franchise (give us a spin-off now please).

The plot of the film is convoluted and ridiculous, even by Jurassic franchise standards, and it’s a stretch to believe all of these characters would end up in the same place. Director Colin Trevorrow, along with writers Emily Carmichael and Derek Connolly, worked overtime to try and turn the franchise into a James Bond or Jason Bourne movie, losing sight of what made Jurassic Park so special. We are so far removed from the first film, in age and tone, everything feels like a cheap imitation and fan service at this point. And making the dinosaurs into background characters is a strange choice. They are around to chase our characters when necessary, but they are mostly just kind of there.

Jurassic Park is a masterpiece, and easily one of the greatest films of all time. What that movie did to advance special effects, both practical and computer-generated, was monumental in the industry – and rarely matched in quality to this day. So the idea of reuniting the main cast in a Jurassic film for the first time is incredibly exciting – on paper. Unfortunately, the reunion feels wasted. Yes, it’s fun to see them together again, until you realize what they are given to do. Dern and Neill do the best they can with the material, and credit goes to them for showing up to play ball. But it’s disappointing that this is the legacy of their characters.

Jeff Goldblum is hands down the MVP of the film as Dr. Ian Malcolm, sliding back into the character with ease and garnering the most laughs of the film. There is no other actor like him, and he delivers his lines in the way only Goldblum can. He is the bright light of the film, and responsible for most of the laughs – and there are some good ones.

On the flip side, as much as I respect Campbell Scott, his performance as the tech-billionaire CEO is weighed down by the terrible script. His scenes are far more awkward than intimidating, and his character is the worst villain in the franchise yet. He may resemble something of a real-world villain, but it doesn’t work when it comes to his world-dominating plans.

It feels misguided turning Owen into James Bond. And Claire isn’t given much to do while splitting screentime with seven other protagonists. If the original Jurassic Park is Die Hard, this one is A Good Day to Die Hard. It worked much better when our heroes were the everyman. Pratt and Howard are serviceable in the roles, but it’s a tough juggling act with all the characters they cram into this story.

Mamoudou Athie makes for a nice addition to the film, playing the right-hand man of Dodgson, and it’s always great to have BD Wong show up – especially when his character actually has some decent motivation. And as previously mentioned, all eyes are on DeWanda Wise when she’s on-screen. A magnetic action star, she could have carried the film on her own. If they make any more sequels, I hope she is involved – and I’m excited to watch anything the actor does next.

The film is not completely devoid of entertainment, as there are some fun action sequences scattered throughout. One of the highlights is a motorcycle chase, where Pratt has to outrun weaponized dinosaurs. And there is plenty of running away from the prehistoric creatures. But what the film really lacks is the horror element that was so perfectly executed in the first film. The stakes feel incredibly low, even though the film tells you how dire they are. There is rarely a moment that the characters ever feel in any real danger. There are a couple of scenes that feel scary, but Trevorrow chooses to lean into the spy-thriller elements more often than not.

There is an action scene where no less than seven characters have to run away from a large dinosaur, escaping by single file by climbing up a ladder to safety. Thanks to the heroics of Ian Malcolm (again, MVP) they narrowly escape without so much as a scratch. The entire sequence feels ridiculous, as do most where there is not a chance any of the characters will be eaten. I am not saying that I want harm to come to any of these beloved characters, but they could at least construct some action where it feels like there are stakes. However, when it comes to random extras, dinosaurs can easily gobble them up left and right. Maybe they are distracted by Ian Malcolm’s shirt being unbuttoned – it’s possible. But when it comes to the main characters, the dinosaurs move awfully slow and have worse “aim” than the Stormtroopers in Star Wars.

For a franchise that started off with groundbreaking CGI and practical effects, it’s disappointing how distracting the visuals are here. The computer animation from 1993 still looks better, which is wild given how far technology has advanced since then. But the difference is where the original film seamlessly blended traditional effects and CG, this film relies on it as a crutch. The movement of the dinosaurs feels uncanny, and gives the movie a cheap feel. Jurassic Park is incredible because the dinosaurs feel real, and so does the danger. There is little of that magic left here.

Jurassic World Dominion is a disappointing conclusion to a trilogy that started off with a lot of potential. While the film is better than Fallen Kingdom, it isn’t enough to save the franchise. There is enough fun to give audiences something to look at while they shovel in some popcorn, but don’t expect the film to do justice to the characters you love. Much like the ending of the original trilogy, we are left looking at the empty vessel of what once contained greatness.