Disney’s THE LION KING Roars at The Fox Theatre in St. Louis (Review) 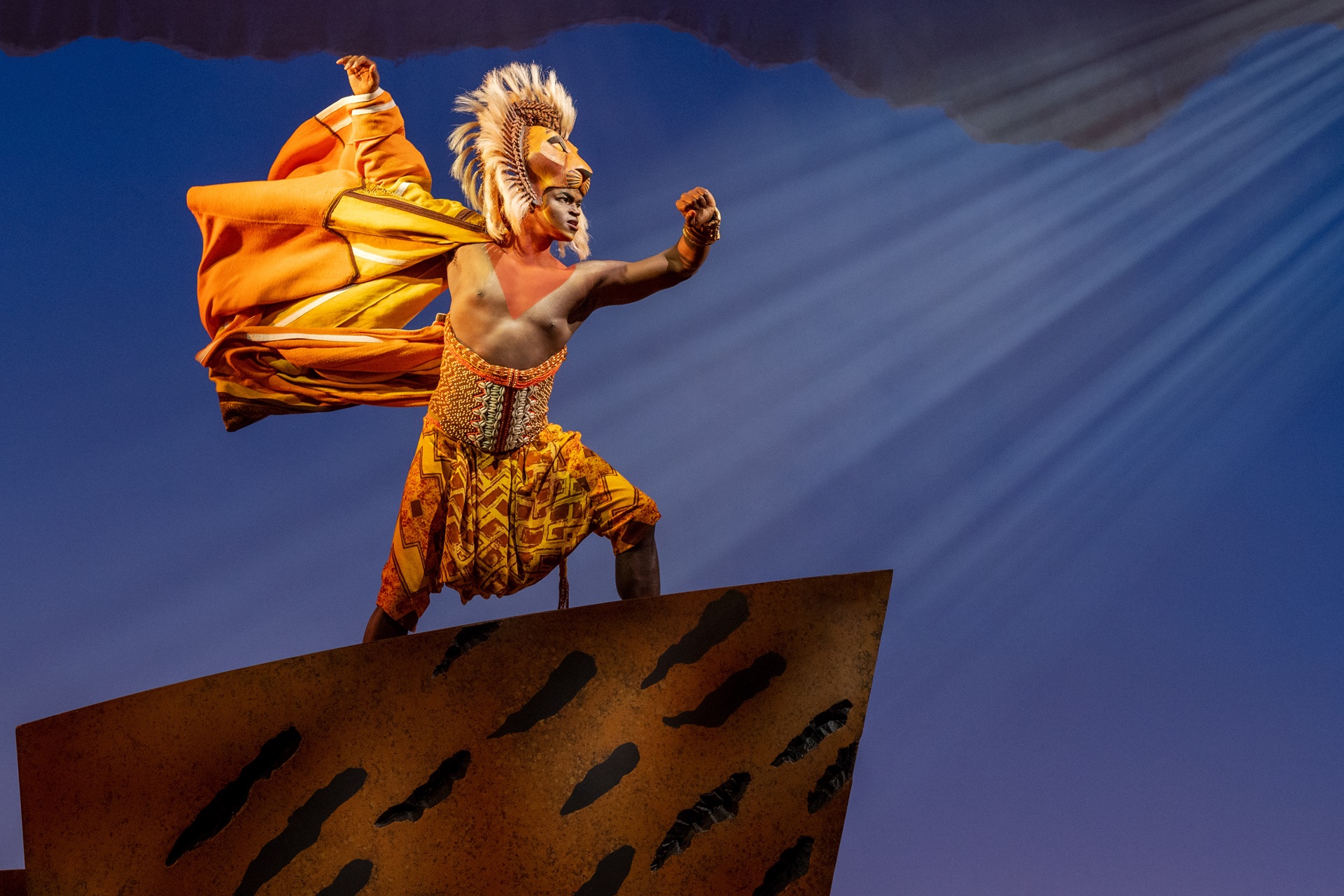 It goes without saying, The Lion King is a fantastic musical.

Based on the 1994 Disney animated film, the Broadway show opened in 1997 and won six Tony Awards, including: Best Musical, Direction (Julie Taymor), Choreography, Scenic Design, Costume Design, and Lighting Design. It holds the record for the 3rd longest-running show in Broadway history, and continues to tour around the world – where over 100 million audience members have seen it. And now, the show returns to St. Louis for the first time since 2017.

The story follows the animated feature closely, which takes inspiration from William Shakespeare’s Hamlet. Set in The Pride Lands of Africa, which is based on real-life Kenya, young Simba (Jordan Pendleton) is born to King Mufasa (Gerald Ramsey) and Queen Sarabi (Diamond Essence White). Instead of celebrating, his uncle Scar (Spencer Plachy) is angered that he is no longer next in line for the throne. Simba and his friend Nala (Farrah Wilson) are tricked into visiting an Elephant Graveyard, where hyenas are waiting for them, but luckily the king’s advisor Zazu (Jürgen Hooper) is able to warn Mufasa in time to save them. But Scar devises another plan which ultimately gets Mufasa killed, and Simba runs away after he is convinced that he is responsible for his father’s death. While Scar assumes the throne, leading to the destruction of The Pride Lands, Simba joins up with Timon (Nick Cordileone) and Pumbaa (John E. Brady) to live worry-free – until he is visited by a ghost from his past and reminded of his birthright.

There are a few truly spectacular moments in musical theatre that stand out above the rest, like when the chandelier falls in The Phantom of the Opera, or Elphaba flies above the stage in Wicked at the end of ACT I, or the helicopter appears on stage in Miss Saigon. Yet, there is nothing quite as exciting as the opening number of The Lion King. It gives me chills every single time I see the show. Rafiki (Gugwana Dlamini) appears on stage to sing those first iconic lyrics of “Nants’ Ingonyama” and “Circle of Life,” followed by the ensemble in their magnificent animal costumes parading down the aisles to the stage. There is nothing like it, and it’s an incredible experience to be in the middle of. The show wastes no time letting the audience know how much of a treat they are in for.

Fans of the animated classic will be delighted by fantastic renditions of the musical numbers they know and love, such as “I Just Can’t Wait to Be King,” “Be Prepared,” and “Hakuna Matata.” But those who are new to the stage adaptation will be treated to some wonderful new songs that aren’t featured in the film, like “They Live in You” where Mufasa teaches Simba about his ancestors, “One by One” which opens ACT II, and “Shadowland” where Nala sets out to save her home.

Gerald Ramsey, who St. Louis saw during the 2017 tour, returns to the role of Mufasa. The actor sounds a lot like James Earl Jones in the original film at times, and is truly commanding as the King. The character is firm, yet kindhearted, which shows during his interactions with Simba. Ramsey and Pendleton play well off one another, for a believable father and son relationship – making what happens in the show even more heartbreaking.

When it comes to iconic Disney villains, Scar is near the top of the list. Because what happens to Mufasa is so tragic, it makes him feel that much more evil. Plachy embodies the character with the sophistication and dark sense of humor he is known for, while also coming across as an intimidating foe. His rendition of “Be Prepared” is a highlight of the show, especially with the ensemble dressed up as hyenas that he is commanding.

Both the child and adult actors who play Simba and Nala do a fantastic job. Pendleton and Wilson look to be having a blast during “I Just Can’t Wait to Be King,” and really feel like best friends. Wilson brings an attitude to Nala which brought several laughs, and Pendleton gives a terrific dramatic performance when it comes to the elephant graveyard and scenes surrounding Mufasa’s death. For the adult characters, Darian Sanders plays Simba with great charisma and a laid-back attitude. But when it comes to realizing his potential, with the help of grown-up Nala (Kayla Cyphers), the actor conveys the strength and conviction the character needs to win back his thrown. Cypher’s heartwrenching rendition of “Shadowland” is exquisite. The chemistry between the two actors works well, as showcased in “Can You Feel the Love Tonight.”

There is plenty of comedic relief in the show, thanks to Hooper as Zazu, Cordileone and Brady as Timon and Pumbaa, and the main trio of hyenas: Shenzi (Martina Sykes), Banzai (Forest VanDyke), and Ed (Robbie Swift). All of the actors do a great job of embodying the characters we know and love, while making slight adjustments for the stage show. Zazu’s self-awareness of being in a musical at times is always funny, and Timon and Pumbaa feel like they lept right out of your TV. The hyenas are given more to do in the show as well and got big laughs throughout the performance.

Another wonderful part of the stage adaptation is the culture on display. There are no humans in the animated film, so we don’t get to see traditional African clothing or performers. The musical does a terrific job of incorporating several African languages (Swahili, Zulu, Xhosa, Sotho, Tswana, and Congolese) and dances throughout the show. The ensemble, donning bright and colorful costumes, punctuates many of the musical numbers – adding another layer of depth and authenticity.

There is no question as to why The Lion King is one of the most popular musicals of all time. Being in the theatre to witness this spectacular show is unlike anything else. The cast and creatives bring the story to life through brilliant costumes, wonderful songs, and terrific performances. It’s a show the entire family can enjoy, and the magic that only musical theatre can offer is a fantastic way to experience this timeless story and music.

See Disney’s The Lion King at The Fabulous Fox Theatre in St. Louis through June 19. Tickets are available via MetroTix. For more information, visit fabulousfox.com or the official tour website at lionking.com.