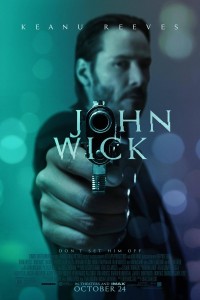 This time of year tends to be a slow time for the movies.. with summer having ended, and it is not yet that holiday stretch in which big movies pull all the stops for the biggest box office draws. That being said, not all movies that are worth your time have to come during the holidays or summer. This happens to be one of those cases in which people be pleasantly surprised; enter John Wick.

Let’s jump into the bare bones of John Wick. John Wick (Keanu Reeves) is a former contract killer who is just trying to lead a normal life( or as normal as one with a history of his could). John spent one of his days driving his sweet 1969 Boss Mustang around and some young thug, Iosef Tarasov (Alfie Allen) inquires about the price of the car. John tells him it is not for sale, but despite that, Iosef and his boys follow John home, surprise attack him, steal the Mustang, and kill his dog because it was barking at them. To add insult to injury, that dog was a parting gift from John’s wife (Bridget Moynahan) in her final days before losing her battle with an unnamed illness (cancer?). Some may scoff at the basic premise of the film, but you have to ask yourself if you had a skill set akin to John’s, and people took some of your property, something of sentimental value; i.e. the life of the dog and it’s connection to someone dear to you, would you not do something about it? People in real life have actually killed for much less.

Though, the story does not fall into the category of groundbreaking, lets talk about what John Wick does quite well… I’m only talking about the action. It can be described as both visceral and stylish with many uses of deadly and efficient movements in a way that is pleasing to the eye. It’s apparent that Keanu has been on a martial arts kick for sometime and this movie is certainly a good outlet for such a display. There were not signs of the whole ridiculous high kick here, ridiculous high kick there, business… it was more like crushed throat here, this guy over there is for sure to have a closed casket funeral. A ballet of chaos if you will. This delivery of action would not have been possible without the likes of stunt coordinators (and in this case directors too) Chad Stahelski and David Leitch. If their names don’t ring a bell, I’ll inform you that these two did a lot of stunt work for The Matrix, so it is safe to say they know a thing or two about upping the ante in making a scene and the actors portrayed looking good in the midst of the madness. Another thing to note is that you can see what is going on. A bullet connecting here, an elbow here, it can actually be seen! Some filmmakers have mistakenly gotten the impression that if  you have a shaky camera and a bunch of random things occurring in the scene, that it is supposed to generate excitement. How does one get excited about things that they are NOT SEEING in an ACTION movie? In short, John Wick does not have this problem.

Yes, John Wick is a bloody action movie, but it is not without it’s comedic beats. The things that generate humor in the film are not done unintentionally. It comes from  well placed pieces of dialogue and use of situational irony. In the case of the genre, such things can add to, or on the other end break what was otherwise a solid film.

Something that does, however, make John Wick standout is the ‘universe’ the movie establishes. It’s quite clear that John Wick has quite the reputation for the insane body count he has racked up over the years, and the fact that the various individuals / or groups (that are still alive) so casually address his line of work. Marcus (Willem Dafoe) is a man who has clearly worked in the organization at least as long as John has, and it is alluded to that they have quite the history. Viggo Tarasov (Michael Nyqvist) seems to be a former employer of John’s and also coincidentally the father of the young punk who just had to have that Mustang that was mentioned before. There is some sort of code that this shady organization John is tied to abides by. One cannot help but wonder just how far these contract killing businesses’ influence stretches in the film’s universe. It’s like they’re hidden in plain sight. It brings about a source of intrigue. With these fun mysteries about, it’d be easy to jump the conclusion of possible sequels, but at the same time there is enough finality where this could be a one-off kind of deal.

With Keanu Reeves having just hit the 50 mark, we can say he has officially joined the “over-the-hill and still kicks copious amounts of ass” club. This seems more like a return to form for Reeves in this genre, who knows, maybe he’ll get Neeson style typecast in a few years. Action movies are a dime a dozen, and while John Wick may not be the most original in concept, but the important thing is that it executes what it sets out to do rather well.

John Wick is a B+