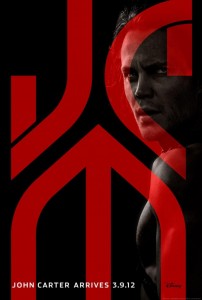 It was in 1912 that Edgar Rice Burroughs published the first part of “Under the Moons of Mars” in The All-Story magazine. This imaginative science-fiction tale was way ahead of it’s time, and played inspiration to many famous writers in the genre we know today. It is only fitting that one hundred years later we find ourselves at the theater watching John Carter, experiencing the story for the first time in a way that can really do it justice.

John Carter (Taylor Kitsch) was a captain in the Civil War who lost his wife and child, and wants nothing more to do with fighting. While prospecting for gold in Arizona the army finds him and demands that he help them fight. He forcefully declines their request multiple times, and escapes their hold by stealing the colonel’s horse. He is chased by the army right into the middle of a fight between them and a group of Apaches. He narrowly escapes, taking shelter in just the place he has been searching for – a cave of gold with a spider-like marking above it. Inside the cave he finds more markings, along with a mysterious amulet, which somehow transports him to Mars. While trying to find his way back home to his cave of gold, he gets stuck in the middle of a war between the inhabitants of “Barsoom,” and must decide whether to stay and fight or go home.

Having never read any of the novels before seeing the movie, I really didn’t know what to expect from John Carter. I am a big fan of Sci-Fi, so I at least knew I was in the right place. But what I definitely didn’t guess was that I would love the film as much as I did. The story is so interesting, especially when you think that it was written over a century ago, and makes for one of the most intriguing films I’ve seen in a long time. It took me right back to the first time I saw Star Wars, or The Terminator, giving me that feeling of epic proportions that you can only get from watching a movie like that for the first time.

The special effects and 3D were great in the film. I started off a couple of years ago being completely anti-3D, but the more movies that use it and the better the technology gets, the more I am starting to like it. I think to get the best effect the film needs to be filmed in 3D, which John Carter was not, but most of the movie is CGI so the computers do a great job of making it 3D. The massive digital cities are beautifully captured and come to life in front of your glasses. Hats off to the animation team for doing a great job bringing these worlds and characters to life after a century on paper.

Taylor Kitsch, probably most famous for his role as Tim Riggins in the Friday Night Lights series, did a great job as the lead. He has the looks and the charisma it takes to carry a movie like this, and you can tell he hit the gym knowing he would be shirtless for most of the movie. His chemistry with Lynn Collins, who plays the princess Dejah Thoris and his on-screen love interest, works well and is fun to watch in the usual “princess argues with her rescuer” sort of way. Their relationship is reminiscent of Leia arguing with Han as she is being rescued.

John Carter will take you on an adventure that captures your entire imagination and leaves you wanting more. If the story of a civil war captain who finds himself on Mars, in the middle of a martian civil war and in love with a martian princess isn’t intriguing enough, I don’t know what is. I think that this movie will do for kids what some of the great Sci-Fi movies of our time did for us, and will be a perfect excuse to share with them our favorites. This is definitely one you won’t mind taking the family to.