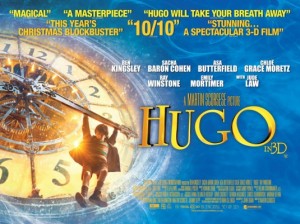 “Hugo” was my favorite film of last year.  I got to see it in 3D only once so I was anxious to see if the film would be just as beautiful on a much smaller screen in traditional 2D.  I am still in awe of it.  From a technical standpoint, it is without a doubt the best film of the year.  Its easy to argue my case since the film won 5 Academy Awards, all of which were in the technical category.  Part of the magic for me in seeing the film the first time was that I had absolutely no idea what the film was about other than a boy in a train station.  If you know nothing more about the film, I would suggest not reading this review and check the film out immediately.

Hugo Cabret is a young orphan who lives in  train station.  He manages all of the clocks, big and small, running through tunnels and little holes to get from one clock to another.  Hugo is also working on a mystery that he believes will reveal a message from his father.  Just before his father passed away, Hugo and Mr. Cabret were working on restoring an automaton, a robot/machine that can write a message.  Hugo is soon aided by Isabelle whose Godfather owns a toy shop in the station.  Hugo and Isabelle discover the missing piece needed to make the automaton work again.  The message is not from Mr. Cabret at all, but a drawing that sends the children on an adventure to discover Isabelle’s Godfather is more than he seems.

As I said before, I loved this film because I had no idea who Isabelle’s Godfather was.  It always seemed strange to me that Martin Scorsese would direct this kid’s film after movies like “The Departed”, “Goodfellas”, and “Raging Bull”.  I love movies so to discover that the film was partly about the life of one of the earliest fantasy/sci-fi film makers, Georges Melies, was a real treat for me.  And the trailers give you no indication of that unless you are really looking for it.  I watched the Oscars with some friends of mine who not quite into film as me (meaning they are not obsessed).  They had no idea what the movie was about and none of the clips really told them anything.  In a world of spoilers and the internet, it is always nice to have this sense of discovery in the theater.

I recently watched “Midnight in Paris” for the first time since May.  I didn’t remember the film being as beautiful as it was.  The cinematography, lighting, set design all combined to make a world that I couldn’t help but be in awe of.  “Hugo” is on a whole different level.  The city shots are incredible detailed and brimming with life.  The train station is filled with people and color and music that comes together beautifully.  It’s just an unbeleievable film to watch, and I wish so badly that Scorsese had one the Oscar for Best Director.

My only complaint is a minor one for me.  The first half of the film focuses on Hugo and his world in the train station.  Running from the Inspector and being put to work by the toy shop owner.  He develops his friendship with Isabelle.  Then once the automaton is fixed, the film shifts to focus more on Georges Melies.  The audience is thrust into the magic he created on screen, his pain in going backrupt, and the restoration of film.  Of course this second half is why I love the film, but it feels slightly too disjointed to me watching it again.