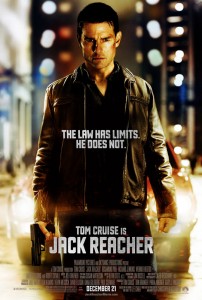 Jack Reacher is the first film in a presumed franchise based on the “Jack Reacher” series of novels by British author Lee Child. The film is based on the 9th book in the series, “One Shot” and tells the story of a framed veteran sniper charged with shooting 5 civilians. The sniper calls on Jack Reacher to investigate the crime and discover the truth. At its core, Jack Reacher is a procedural; think John Grisham meets Tom Clancy. Though despite the somewhat tired genre, Jack Reacher manages to be an enjoyable film.

The titular Jack Reacher is an amalgamation of every reluctant super cop we’ve ever seen. He’s Dirty Harry, Jason Bourne, John Rambo, John McClane, Sherlock Holmes, and even a little Batman rolled into one. While that may seem totally awesome, it’s ultimately the casting of Tom Cruise that weakens the character.

There’s a disconnect between the gritty, brutal nature of the character Jack Reacher and the image of 5’7” pretty boy Tom Cruise. Don’t get me wrong, Mr. Cruise looks great elbowing people in the face and gouging out eyeballs with his thumb, but when he threatens someone with a line about drinking their blood…it just doesn’t work.

What does work is the engaging story and whodunit nature of the film. Even though the opening shot of the film shows us whodunit, it’s exciting to see Jack Reacher and defense attorney Helen, played by Rosamund Pike, unravel the layers of corruption and solve the mystery. The greatest part of the film however is that Jack Reacher transcends almost every single action movie cliché known to man. If you see the film, you’ll know what I’m talking about, but it’s the little things.

For instance, you know how people in movies always have to have one last quip before they shoot somebody…Jack Reacher just goes for it. Or how elaborate fight scenes could be avoided if the hero just kicked somebody in the nuts…he kicks some people in the nuts. There are several instances where it seems like somebody heard all the shouting at the screen that happens with movies…and for me, it was quite refreshing.

Another notable aspect of the film is auteur film director Werner Herzog’s turn as the film’s maniacal villain. There are ultimately enough positives to make this film worth seeing. It’s not going to go down in history as anything spectacular, but it’s an enjoyable popcorn flick with enough plot to keep it from being mindless action.