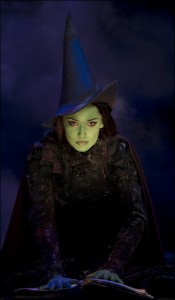 From the moment she is born, Elphaba is reviled by everyone around her due to her sickly green color. Despite being loved by no one other than her sister, Nessa Rose, who her father heavily favors, she is a shy but intelligent woman. Upon arrival at Shiz University it is discovered that Elphaba has incredible powers that headmistress Madam Morrible wishes to harness, much to the dismay of fellow student Galinda. What starts as a schoolgirl battle between Galinda and Elphaba ends up with the two becoming best friends, competing for the same man, a Winkie prince named Fieyro. Together the two uncover the plans of the Wizard, and what he has in store for the land of Oz. The events of the story propel us to a finale that brings light to a misunderstood villain.

Wicked has now been running shows across the world for almost a decade, becoming one of the most popular musicals of all time. When watching it, it isn’t hard to see why. With a mixture of clever writing, familiar themes, and incredible music it is easily one of the most entertaining shows you can see on the stage. It’s hard not to get chills as the first act ends with the bombastic “Defying Gravity”. In fact, the first act ends so strongly it is amazing that the second act holds up at all. If there is one flaw in the show, it is the fact that the first act tends to overshadow the second. The second act while wrapping up the show in a pleasing manner, never seems to hit the musical highs achieved in the first.

This was my third time seeing the show, and possibly my favorite performance of it yet. Christine Dwyer is fantastic as Elphaba. She exudes intelligence, power, and has an incredible vocal range to top it off.  Meshing well with her is Jeanna de Waal (Glinda/Galinda) who brings quite a bit of fun to the action, but has a slight tendency to overplay the already silly character. The biggest improvement of the show was Billy Harrigan Tighe as Fieryo, the Winkie Prince. Tighe hits all the right notes as a character, and comes off as effortlessly cool.

There a little complaints to be had from a show that has been fine tuned over the past ten years to be a damn near perfect crowd pleaser. It is a show that will continue to run for years to come with capacity crowds. Make sure to catch it at the Fox Theatre now through January 6, 2013!

Check out all the details and buy tickets at The Fabulous Fox Theatre’s Website.