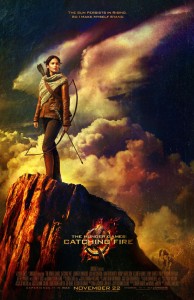 As a Hunger Games fan since the first book was released in 2008, you can imagine my excitement upon learning of the film adaptation of the first book. While I’ve always had a philosophy on such adaptations that books will always be better, I still hoped the movie would be just as good, if not better.

Alas, with all of the necessary background information put into the first movie, it left me wishing for more aspects and quotes from the book. I still looked forward to the movie Catching Fire, but this time was more reserved as to not get my hopes up. My efforts were met with satisfaction, and I was impressed. The beginning of the movie set the background starting just where the last movie left off, which was nice to see as not to confuse the viewer. Throughout the film, I could clearly see the incorporation of the smaller aspects of the book as well as point out direct quotes from the book. (At the end I left wishing I had actually brought my copy and followed the quotes, but it would have only distracted me from the beauty of the film.)

The characters were perfectly cast, specifically the newly introduced characters Mags (Lynn Cohen), Finnick (Sam Claflin), and Johanna (Jena Malone) – who went on to steal the show! You could see the characters within these actors. Lastly, the camerawork and the computer generated special effects were much more professional than those in the first movie. An example that sticks in my mind most is the fire that lights up Peeta and Katniss’ costumes during the chariot parade. In the first movie, the whole time I could only think of how cheesy it looked. In Catching Fire, you can see a clear improvement that adds to the overall effect of the realistic-feel of the movie.

At the end after the last words were said (also directly from the book) and the final credit started rolling, I found myself with a smile on my face which could have possibly been there during the entire duration of the film. I felt like I was watching the actual book the whole time, a book that is every bit as captivating. With strong performances by the Oscar-winning actress Jennifer Lawrence and the actors of her male love interests in the movie, Josh Hutcherson (Peeta) and Liam Hemsworth (Gale), the story unfolds into more than just a story about an oppressive totalitarian government, but one of romance, of family, and most importantly, of the importance of remembering who the enemy is.