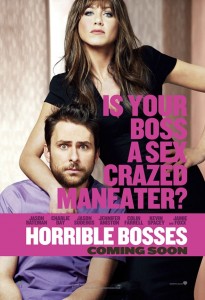 It happens to everyone, you see that one trailer that makes you laugh til your gut hurts, but immediately you think “I bet they showed all the funny parts in the trailer”. Which is exactly what I was hoping would not happen with the new comedy film, Horrible Bosses, a film about three men who as the title says, have horrible bosses, and come up with a plan to kill each others’ bosses to make life a bit easier. Nick’s (Jason Bateman) boss is an ego driven maniac who cares about no one but himself, Dale’s (Charlie Day) boss is an attractive dentist, who also happens to be a sexual deviant, and Kurt (Jason Sudeikis) has a boss who uses the company as a piggy bank for coke and happy ending massages.

The idea sounds pretty dark, so much that you’d think this would be a pretty dark comedy, but all violence that takes place in the film is pretty tame. If you can’t tell from the trailers, none of the main cast is a cold blooded killer, only men pushed to the brink where they think they could do such a crime.  No need to worry though, there is still plenty enough offensive and adult humor to fill the void left by disappointing features like The Hangover 2 this summer.  Director Seth Gordon walks that fine line where he keeps it from being over the top, but offensive enough to keep you chuckling even after the big laughs.

What really makes the film work is the cast, there are hardly any weak links and the three leads have great comedic chemistry. Charlie Day is the only one who seems to outshine the cast around him, despite the fact that his lovable oaf character he plays is a little too reminiscent of every other role he’s ever played.  Day has one of those qualities that could see him garner lots of comedic acclaim the way Zach Galafianakis did with The Hangover films. Bateman once again plays the solid straight man of the cast, and he’s become exceedingly efficient at it. I’m not sure there is anyone working in Hollywood currently who does what he does better.  Sudeikis once again makes a case for a jump to a leading role position rather than just a supporting character.

Not only is the main cast of the film strong, but so is the supporting cast. Kevin Spacey is amazingly evil as Bateman’s boss, and makes it quite easy to despise him. Where as Colin Farrell is truly despicable, and is easily the biggest jerk of the bunch.  Jamie Foxx’s character “Mother****er Jones” has some of the best scenes in the film, mainly due to his outrageous name and demeanor. Many people forget Foxx got his start in comedic roles, and he still easily fits in them today. Jennifer Aniston is sometimes hard to take as a sexual deviant, but it’s entirely possible it is hard to imagine her as that due to her past catalog of films. Plus, it is hard for any straight male to sympathize with Dale’s plight (which the other characters agree to) when someone as stunning as Aniston is the one doing the sexual harassment.

Horrible Bosses is easily the funniest movie of the year (so far), and has the potential to boost the careers of all involved, especially director Seth Gordon who missed on his first big feature, Four Christmases, but had the amazing King of Kong: A Fistful of Quarters earlier. The film is sure to be a hit with many demographics, and could be one of the breakout hits of the summer. Don’t believe me? Go see it for yourself.