Scene from "The Troll Hunter." Image via trollhunterfilm.com.

Many years ago, red-headed hellion Pippi Longstocking searched for the elusive “spink” in the book Pippi in the South Seas. Pippi didn’t even know what the hell “spink” was – it was simply a nonsense word she tried to apply to a rake, a disease and finally a beetle. She claimed she would know a real spink when she saw it, though.

The kids in The Troll Hunter find their spink, too, though it’s not what they’re expecting. Three students haul their camera equipment through Norway to investigate a grizzled man named Hans who supposedly poaches bears. They soon realize, though, that they’re going to need a bigger boat because Hans doesn’t actually hunt bears – he hunts trolls. Oscillating between curiosity and skepticism, the students decide to make a documentary of Hans’ troll-hunting adventure and continue following him throughout the country. But why are trolls in Norway at all? And how many? And why is no one talking about them?

This 2010 Norwegian mockumentary, which played in very limited release recently in St. Louis, started out as a bit of a slog. Personally, it took me a little while to adjust to foreign tongues and subtitles. There also was an obscene amount of driving – driving on highways, driving through the forest, driving near fjords, drivingdrivingdriving – and I sort of felt like I was trapped in a car with my parents for way too long.

Once that first troll roar happened, though, the pace picked up and the Blair Witch Project comparisons began. Shaky camera? Check. Student documentarians? Check. Unseen (for a time) monster? Check. Dissent among the ranks? Check. And then once the trolls are sighted, the flick turns into Cloverfield, with its stompy monster and deep-level coverup stories. The Troll Hunter wasn’t a carbon copy of either of these movies, to be sure, but the influence was obvious; the balance of suspense plus believability in The Troll Hunter was better than the two aforementioned films. 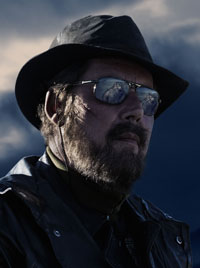 The actors did a good job selling the story. While the written exposition at the beginning and end of the film were dull, the cast was better about pulling me along for their adventure, showcasing their combined fright and intrigue without being campy or unnatural about it. Otto Jespersen was extraordinary as Hans; though he’s known as a controversial comedian in Norway, Jespersen held onto enough gravity to make his role as a one-man troll keeper quite believable. The actors playing the students generally were fine, though they could be played by just about any competent actors. However, Hans Morten Hansen as Finn, the producer and host of the documentary crew, stood out with the inquisitiveness and tenaciousness the role needed, especially as political intrigue was rolled out in the script.

And the trolls themselves? The script did a good job of explaining that there were different types of trolls with certain characteristics; each kind reacted to outside forces and experienced death in particular ways. In general, though, trolls were drawn to Christian blood, loved sheep, ate rocks and craved rubber tires. And I always pictured trolls as looking like a cross between those stupid dolls and Blanka, but the movie showed that wasn’t necessarily the case – in all its surprisingly good CGI splendor.

Was The Troll Hunter campy? A bit. Was it derivative? A little, but not overly so. Was it filled with more than just “I’m killing trolls now! Yay!” plotlines? Absolutely. It’s not the best film ever made, but it worked fear, curiosity, politics and adventure into a surprisingly nice little ball. That’s totally worth saying “spink.”

Learn more about The Troll Hunter at trollhunterfilm.com.