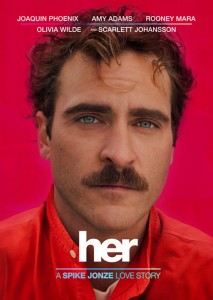 At first glance, the idea of a film that revolves around a man falling in love with his smartphone might seem a bit odd. Yet as you watch Spike Jonze’s latest film Her, you realize that it is about so much more.

Theodore (Joaquin Phoenix) is a writer living in a not-so-distant Los Angeles of the future. His job is to create beautiful love letters for people who lack the creativity – or perhaps a better word is motivation. After a heartbreaking end to his relationship with his ex Catherine (Rooney Mara), Theodore stumbles upon the “first artificially intelligent operating system, or OS. Unlike the ones we know today, this OS has a name and a personality – and her name is Samantha (Scarlett Johansson). What starts out as a companionship turns into more as Theodore starts to fall in love with Samantha, while he teaches Her how to love.

I can’t imagine this film being anywhere near as brilliant as it is without the performance given by Joaquin Phoenix. He is in almost every scene, and pretty much front and center the entire time. There are great supporting actors like Amy Adams, who plays his neighbor, and Chris Pratt who works in his office. Yet the real magic comes from the interaction between Theodore and Samantha. And the emotion that Phoenix exudes while interacting with nothing but a handheld device is magnificent. The actor has been one of my favorites since I saw him in his first major role as the villain Commodus in Gladiator, and has continued to impress me with role after role. This may be the best performance of his career, and that is saying a lot coming off of the likes of The Master last year.

As if Phoenix’s acting wasn’t enough, Scarlett Johansson is brilliant as the OS Samantha. Never once do you see her on-screen, yet her voice says it all. Johansson gives a powerfully emotional performance throughout the film, making what would normally appear to be an odd interaction seem so natural. We watch her character grow before our eyes, and can truly sense the naiveté in her voice turn into a complex being over time.

One of the things that makes the film do great is that it is set in the future, yet there are no flying cars or hoverboards (no offense, as futuristic films about flying cars and hoverboards are great). Instead, writer/director Jonze paints a picture of a future that doesn’t seem too far off. It is a future where people depend on technology, and everyone seems to wear earpieces as they hurry around their busy existence appearing to talk to themselves. Is that really much different than things are today? The fact that someone could fall in love with their computer and an artificial life form is a social commentary on what society has become – and where we are going. Jonze says so much with his film while telling a touching story that never feels heavy handed.

There is no doubt, Her is easily one of the best films of 2013. Joaquin Phoenix has already been nominated for a Golden Globe in the Best Leading Actor category, and I would be shocked if he doesn’t get an Oscar nomination for his brilliant performance. As much as I love Being John Malkovich, this has replaced it as my favorite Spike Jonze film of all time. Full of beautiful visuals, incredible performances and an intelligently written script, Her should be on everyone’s list to watch out for.