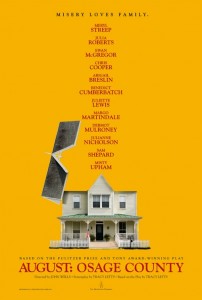 Based on the 2008 Pulitzer Prize-winning play, August: Osage County attempts to translate the dark comedy from the stage to the big screen. Packed with an A-list cast, you certainly can’t make the argument that they didn’t get enough star power. Tracy Letts, the award-winning author of the play was even responsible for the screenplay. Yet unfortunately, the film doesn’t quite capture the magic of the dysfunctional family the same way that the stage show does.

Having seen the national tour of August: Osage County when it came to the Fabulous Fox Theatre in 2010, I had high hopes for the film adaptation. The play had become one of my favorites of all time, with fantastic acting and an intriguing story. I knew that it wouldn’t be easy to pull off a movie version, but I wasn’t too worried with the cast that was assembled. Unfortunately the magic of the stage just wasn’t there. Often times the film comes off as tedious and a bit boring, whereas the pacing of the stage show was spot on. Also, the story is supposed to be a dark comedy – yet the film appears to try and take itself too seriously. The result is a bunch of actors that just come off as awkward.

Meryl Steep, while giving an incredible dramatic performance as the matriarch of the Weston Clan, just didn’t seem to fit right with the story. The character is supposed to be harsh, yet funny. But instead Streep’s version of Violet just comes off as mean and unlikable. Estelle Parsons (Bonnie and Clyde) was absolutely amazing in the role when she took over for Deanna Dunagan.

The blame can’t be put on the actors, as there were plenty of veterans in the cast. It seems that director John Wells must not have had a very good understanding of the source material, nor the tone of the story. Sure, the subject material is dark and deals with plenty of uncomfortable things. Yet that is where the comedy aspect comes in. You are supposed to enjoy the story nonetheless, connecting with the dysfunctional family that may share some aspects of your own, and laughing along with them. Unfortunately for the film, there aren’t many bright spots and none of it seems all too fun.

If you never had the chance to see the play, it is truly a shame. There is no question as to why the book won the Pulitzer, and the performances on the national tour were terrific. I would highly recommend catching it if it ever has a revival or production. For now, we have the film version which doesn’t do the story justice. There are moments here and there that might cause your lip to curl in the upward direction, but they are few and far between. Maybe I was spoiled by seeing the play, and holding it in such high regards. But frankly there is no comparison between the two.

August: Osage County is a C.