“Whatever You Do, Don’t Eat the Fucking Candy” 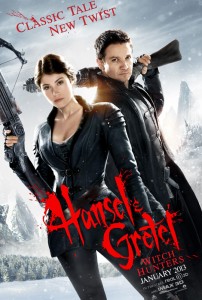 I’m not going to lie, I had zero interest in seeing this movie.  It looked like a cheesy update to the classic fairy tale of Hansel & Gretel.  The trailers made the movie look like it was one bad joke and poorly choreographed action sequence after the next.  A flick that was in the same vain as the horrid Abraham Lincoln: Vampire Hunter and Red Riding Hood. I have a feeling that MGM wanted to float under the radar during Oscar season.  I was wrong.  Hansel & Gretel: Witch Hunters is in fact a cheesy update on the classic fairy tale, but in a good way.

This spin off continues the story of Hansel & Gretel after they kill the witch that tried to eat them.  The two siblings begin to make a name for themselves by killing witches and becoming bounty hunters.  Travelling from village to village killing the evil witches who kidnap children and by rescuing the children in the process. One such mission brings them to the small town of Augsburg where they arrive just in time to save Mina (Pihla Viitala) from wrongfully being put to death as a witch by the villainous Sheriff (Peter Stomare).   The siblings were hired by the town’s Mayor (Rainer Bock) to hunt down the evil witch that has kidnapped 11 of the towns children.  They soon discover that the missing children are involved in a bigger agenda set into motion by Grand Witch Muriel (Famke Janssen).

I’m not sure if this movie was an attempt to reincarnate another legendary tale (Van Helsing and The Wolfman), but on the surface, this movie is a fast-paced, over the top action flick that doesn’t take itself too seriously.  Director Tommy Wirkola (Dead Snow) is smart to put a big action sequence in about every fifteen minutes.  Anything less and the movie would start to drag.  I also really enjoyed the Troll, Edward.  The CGI on the character was great and was very reminiscent of the Jim Henson creations from Labyrinth and The Dark Crystal.  The other stand out for me was actress Gemma Arrterton (Prince of Persia: The Sands of Time and Clash of the Titans).  I think this role might put on to some people’s radar as an action star.  She’s sexy, funny, and bad ass.  As the resident comic guy, I think she would make a great Jessica Drew/Spider-Woman.

There are a couple things that I had a hard time looking past.  The first being that everyone, with the exception of Hansel and Gretel, spoke with an accent.  Both of them grew up in Germany, yet they both have no accents.  The second was something I found more humorous than annoying.  Apparently, when Hansel ate the candy from the witches house as a boy, it gave him “the sugar sickness” (that’s an actual line from the movie).

Overall, I was surprised at how much fun I had with the flick.  I will say that if you’re going to see it, skip the 3D.  I felt like it was an after thought.  On the upside though, it is a fun popcorn movie.  Lots of over the top action, decent jokes, and cool looking troll.  Leave the kids at home for this one, but I think this would make a fun date movie.