Another Take By Zac: “The Hangover Part II” Review 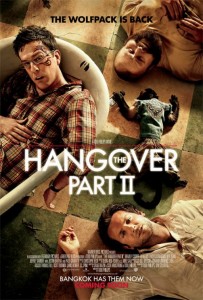 The Hangover Part II is a lazy, uncreative, and terrible film that improves nothing upon the first film and in fact it copies the original almost note for note to painful affect.

You know the story, (no, literally, it’s exactly the same) Stu, Phil, and Alan go out and get so messed up that they can’t remember what happened the night before.  A fourth party is involved, is lost and missing a finger, and the group must track down their whereabouts the night before.  The problem is it takes what feels like an eternity to get to this point and I feel like the film would have been better off just picking up right with everyone waking up.  We are introduced to quite a few new characters, Stu’s soon to be  in-laws to be exact, get reacquainted with the gang, and endure an awful rehearsal dinner scene, all among some rather pointless attempts at character building.  People are signing up for this film to see the debauchery and it takes a very long time to get there.

And when it does get to the crazy stuff, it fails to be all that crazy.  The first film was fresh, surprising, and original and repeating the exact same format beat for beat does not make this film any of those adjectives.  In fact it makes things feel tiresome, extremely repetitive, and stale from frame one.

The film’s pacing drags along from the very first scene and the film feels much more about plot rather than the characters this time around.  The big gags are contrived, Stu takes some horrendous things that happen to him in uncharacteristic stride, and Galifianakis’ shtick falls flat here a lot of the time.  Nothing works for this film.  There is a meditative sequence that goes for shock, and fell flat across the entire audience I saw the film with, and while it is an interesting idea it just comes across as nothing more than the stunt I think it ultimately was.

The film is just so lazy I can’t imagine how anyone can not notice and feel like they are being ripped off.  The tone of the film is likely to turn some people off as well but I found it to be one of the only interesting things going on in the picture.  Sadly the film doesn’t really embrace its dark side like it could have, which could have made the film a far more twisted and fucked up affair.

The main leads, Zach Galifianakis, Bradley Cooper, and Ed Helms all come in and do fine jobs at recreating their characters; they are just given next to nothing funny nor interesting to do with them.  Ken Jeong returns as well and his character, Chow, is beyond annoying.  The character was used just enough in the first film but here he is almost unbearable.  Jeong’s accent might be racist as well and I don’t even know how that is possible since he is Asian.  Mason Lee plays Teddy and is awful every time he opens his mouth; thankfully those moments are few and far between.  The movie is so bad even Paul Giamatti fails to be funny or entertaining.  The film’s final cameo is also so incredibly forced I think I audibly groaned.

In the end, The Hangover Part II is a colossal failure.  The cast involved should not be producing a film this painstakingly bad as I was bored and ready to get out of the theater not too far in to the film.  If you wish to see the exact same movie as the first, only barely funny, incredibly slow paced, and dearth of any creativity then you should rush out to see this film.  My two word review would be this: See Bridesmaids.

The Hangover Part II is an F