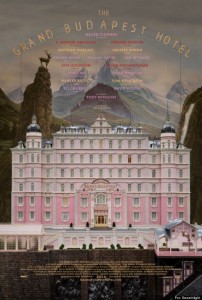 Wes Anderson has a toy box. And in this toy box, Anderson has a camera – some might find it frustrating, while others find it magical – that frames almost every scene perfectly symmetrically. Sometimes this camera, from a fixed spot, will rotate left or right 90°, even 180° (and once in awhile, this camera will pivot all the way around, revealing a 360° set.) When the camera does move, it dollys left or right, following characters that move left, right, forwards or backwards – rarely does anyone move from a fixed line in a Wes Anderson movie.

Also in Wes Anderson’s toy box, are characters that are offbeat, sometimes cartoony, other times remarkably thorny, yet all likable, even when they do unlikable things. And these characters are played with a trusty collection of action figures… let’s see, he’s got a Bill Murray, always a favorite, a Jason Schwartzman, Owen Wilson usually makes an appearance somewhere. Yay, Jeff Goldblum! Ooh, Bob Balaban! Not always used, but a welcome sight…

It this sounds snide or dismissive, it’s not meant to be; I like when Wes Anderson opens up his toy box. His human cartoons take me to a place that gives me a fuzzy warmth, where profanity and harpsichord music coexist in perfect harmony.

Starting simply with a young girl reading a book near the memorial of a famous author, the story is told through a stacked layer of narrators that takes us to a point in time when the Grand Budapest Hotel, a once magical place, began to lose its luster. Bookended by the cold realty of two world wars, the Budapest is luxury hotel located in the Republic of Zubrowka, run under the deftly roguish hand of Gustave H. (whimsically played by Ralph Fiennes, who exhibits whip-smart comic timing). When young Zero (Tony Revolori, a flawless comic foil to Fiennes) becomes bellboy and protege to Gustave, he quickly finds himself swept into a twisted adventure that involves, among other things, a murdered countess, a priceless painting, a “Great Escape”-style prison break, fascism, a gentle pasty maker, evil Willem Defoe, a wild chase sequence down a snowy mountain and a secret society of concierges… but not necessarily in that order.

At this point in his career, Wes Anderson has clearly embraced his toy box. And, considering the fact that he can pull in Jude Law, Tilda Swinton or Harvey Keitel in, more or less, cameo roles, is testament that there are plenty of people who want to play along.

During the closing credits, the woman next flatly concluded with the dismissive assessment, “That movie was weird.” Maybe. But it was just my kind of weird, and I was happy for another trip to the toy box.