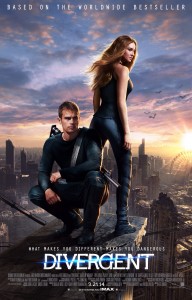 It’s been six months since Hunger Games: Catching Fire which means it’s time for the latest post-apocalyptic, kid-lit franchise to get its shot at box office glory. Say what you will about Hollywood dumbing-down America; at least they’ve taught millennials the meaning of the word “dystopia” (regardless of what David Axelrod seems to think).

The story takes place within a city that’s been walled off in order to protect its citizens from an unrevealed (hey, that’s what sequels are for) threat. Civilization has been divided into five groups; each tasked with its own societal function. These factions (as they’re called) are: Abnegation, meant for the altruistic; Amity, for the nonviolent; Candor, for the truthful; Dauntless, for the courageous; and Erudite, for the intelligent. But some are “factionless” and live in the periphery of society eating from dumpsters and just being generally all around sad and stuff.

While you are born into a faction you are allowed to select your own faction on your 16th birthday. In an effort to help you choose “correctly” the government administers a test that reveals to you which faction you are best suited for (though you are technically allowed to select any faction). Enter our heroine Tris (Shailene Woodley). She was born to Abnegation but has never really felt like she fit in. (Teenagers, amiright?) Her test reveals her to be…da, da, DAAA…divergent. (Gasp.) This proves to be problematic as the government frowns on the factionally ambidextrous. And by “frowns on” I mean “hunts them down and kills them.”

Tris keeps this piece of information to herself and chooses Dauntless as her faction. This is for the best since a movie dedicated to the Amity faction would be pretty boring. (And a movie dedicated to the Candor faction has already been done.) However, Dauntless has an intense training process and not everyone makes the cut. And this year there’s a new wrinkle: if you don’t make it into their faction you are cursed to be factionless.

The film itself is serviceable but its affectation is flat. Granted, some of that is necessitated by the dreary, futuristic setting. It’s almost impossible not to make comparisons to the Hunger Games franchise and, while that is also set in a similarly dreary alternate future, we still have the opulence of the elite to add a dash of color (even if we’re meant to deplore that added dash). But there’s none of that here. The film would have been well served by venturing outside of its walled city though, presumably, that particular adventure is being saved for the inevitable sequel.

Eventually the clichés begin to pile-up. People aren’t who they initially appear to be. Tris struggles to compete until…a training montage. And there is, of course, the obligatory love story as she takes up with Four (Theo James). The two add some friction to their faction as they graduate from Dauntless to Pants-less. Thankfully Woodley carries the film; investing the story with more emotional resonance than it probably deserves. Still, as the Hollywood machine churns out more and more of these sorts of films, it’s hard not to feel as if Divergent would have been more accurately titled Variant.