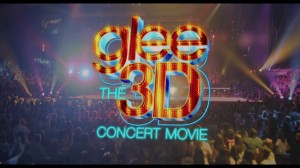 In a mere two seasons, the Fox sensation Glee has managed to capitalize on 11 CD’s, 205 singles, a competition reality show and now a feature film. One thing is abundantly clear…the creators of Glee are in it for the art.

Glee: The 3D Concert Movie claims to be a “documentary”. It features the cast of Glee in character as they tour America. The performances are peppered with back stage antics and “inspirational” stories of Glee fans and how the show has transformed their lives.

The cornerstone of Glee has always been the music and this film is no different. The musical performances are nothing short of spectacular. They’ve taken the best part of Glee and cranked it to 11; the sound system in your local theater is better than any home theater and the music sounds great. Glee has never sounded or looked better. Unfortunately, the secondary material that they weave throughout the film is crap.

Glee 3D tries to wedge several “inspirational” tales of real-life Glee fans into the film. One story in particular follows a cheerleading dwarf and her run for prom queen with her average-height beau. While the story may be inspirational on its own, within the context of the movie it feels very out of place – almost exploitative at times. Glee 3D’s biggest weakness is its lack of theme – it tries to be too many things at once. If there were a film of nothing but performances, it would be great. If there were a true documentary about the impact of Glee in popular culture, it might be interesting – but to try and mash them together and slap on a pointless 3D label to squeeze out as much money as possible is simply pointless.

If you’re a diehard Glee fan, you will surely love the performances. With over 20 different songs, everybody gets their time in the spotlight and many of songs sound even better than the official singles. However, if you want more for your ticket+3D price than an hour and a half of songs, you’ll be sorely disappointed.

–Worth Somebody Else’s Money–

Are you excited for the Glee movie or do you think it’s a shameless ploy for more money? Let us know in the comments section below.