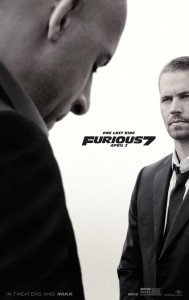 If you were to show someone the original film of the Fast and Furious series, and skip them directly to Furious 7, they’d most likely have trouble believing the two are part of the same series. The original film, The Fast and the Furious, was a Point Break ripoff that replaced extreme sports with illegal street racing. Furious 7 has more in common with Marvel’s The Avengers these days than it does its original premise. Sure, the fast cars are still there, but they don’t serve the importance they did in the first film. Now they are merely a mean to an ends. So, needless to say, the series has evolved. Has it been for the better?

First thing to note: if you want to enjoy Furious 7, stretch your suspension of disbelief to an unbelievable level. Much of what happens over the course of the film takes a huge leap of logic to believe. If you are willing to treat it the same way you would treat a superhero film or fantasy, then quite likely you’ll be taken away by the over-the-top action set pieces.  The story itself is really just an excuse to show the audience these somewhat gaudy scenes. They introduce uber-baddie Deckard Shaw (Jason Statham) in a clever scene where he has destroyed an entire hospital and special ops team, just to give a speech to his brother who happens to be in a coma. Sure, it’s a bit of a waste of effort on Deckard’s part, but as we only see the aftermath of what he’s done, we know he’s the baddest of the bad.

The film follows much of the same crew we’ve seen in previous films, Dominic Toretto (Vin Diesel), Brian O’Connor (Paul Walker), Letty (Michelle Rodriguez), Roman (Tyrese Gibson), Tej (Ludacris), and Hobbs (Dwayne “The Rock” Johnson).  Letty is still dealing with memory loss from three movies ago. Brian is struggling with the boredom of everyday life and parenthood. Dom is angry, presumably because of a healthy dose of steroids. Roman and Tej, well, let’s not be too concerned with their motives, because they are just two dimensional characters added for occasional comic relief. Missing is Han (Sung Kang) who died in a post credit sequence in the previous film (and the film’s third entry, Tokyo Drift). His death at the hands of Deckard Shaw causes the gang to go look for revenge.

Aiding them in this is a shadowy figure by the name of Mr. Nobody (Kurt Russell), a Belgian ale obsessed suit who may or may not be Snake Plisken. Mr. Nobody tasks the gang with recovering a device called “The God’s Eye” and the hacker Ramsey (Nathalie Emmanuel). The device uses all digital devices to keep track of anyone in the world. With possession of the device you could easily find Waldo, or in their case Deckard Shaw.

Each entry into the Fast and Furious series has upped the ante, and Furious 7 is no exception. The heroes hit harder, the cars are more expensive, the situations are more dire, and the explosions are bigger. The brains behind the franchise have smartly stopped trying to make sense of everything. They’ve embraced a cinematic world where head on car collisions do nothing more than cause temporary pain, cars speed through city streets that somehow contain no pedestrians, and Ludacris is a computer hacker. Furious 7 is a fully realized fantasy world. Dominic Toretto heals faster than Wolverine on meth. It’s all part of the game, and the game is played well. The Fast and Furious has become the cinematic equivalent of a Katy Perry song, not a lot of substance but a lot of fun in the moment. It’s not high art, but it is not trying to be. It’s an excuse to see good looking people throw themselves into dangerous situations that ultimately have no consequence.  It isn’t for everyone, but those that enjoy well choreographed action will fine plenty to love.

In November of 2013, one of the stars of the series, Paul Walker, tragically died in a car crash. Walker had filmed a large portion of Furious 7, but with his death the studio was forced to halt production and find a way to gracefully remove his character from the series. To accomplish this they used his brothers as stand-ins and a heaping of CGI to create a number of scenes to honor their fallen friend. Many were skeptical of it when it was announced, but it needed to be done. Walker was the most important character in the series alongside Diesel’s Toretto. The best thing about Furious 7 is the send off to Walker. It’s touching and will likely leave a few in tears. The CG isn’t obvious and makes Walker’s additional scenes even more heartbreaking than one would think. For a series that is loud in everything it does, it’s hard not to be impressed by how deftly they handled the retirement of Brian O’Connor (and the death of their real life friend, Paul Walker). They put a bookend to his story, and they do it with such aplomb that it feels like this was the way it always should have ended.

In the end, this review isn’t going to convince you one way or another to see Furious 7. If you’ve found yourself enjoying previous films in the series, you’ll love this entry. If you’ve hated every moment you’ve seen before, it’s best to skip this and spend your money elsewhere, because this won’t be changing your viewpoint of the series.