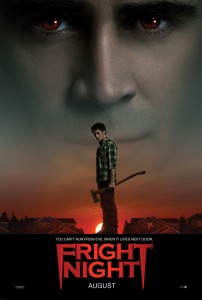 In fact, aside from the characters’ names, there is little salvaged from the original story. After climbing the social ladder, Charley Brewster (Yelchin) finds himself with a new group of friends and a vampire living next door…a hell of a way to spend his senior year. Fortunately, he finds others to help him fight this über -cool vampire (Farrell).

While not perfect, Fright Night holds its own against the equally imperfect original. The stellar cast appears to be having fun with the campy, self-aware nature of the film and each actor finds his/her stride in their particular role. Colin Farrell seems to be having the most fun, as evident in any of the scenes that require his signature cocky charisma, but David Tennant may steal the show for some.

Known primarily as his role as “The Doctor” in Doctor Who (and a small role in Harry Potter and the Goblet of Fire), Tennant seems to be channeling his inner Russell Brand for his role as Peter Vincent: Vampire Hunter.

The worst part of this remake is its use of the “3D” technology and unfortunately it can’t be even blamed on poor post-conversion. Fright Night 2011 was shot in 3D with 3D in mind and aside from a few blood spatters and burning embers, there is nothing to show for it. Sure, there might be depth to the rows of houses in Fright Night’s Las Vegas subdivision, but how does that add to the story? This is just another poor excuse to charge an extra $3 per ticket.

At the end of the day, this Fright Night remake works on the same levels as the original. There will be some diehard fans who’ll feel betrayed by the liberties this film takes, but it’s still campy, it’s still fun and it’s still enjoyable. Just don’t expect it to change your life.

–Worth Somebody Else’s Money–

After you see Fright Night, check out one of the Top 10 Haunted House Movies