Horror fans have a lot to be thankful for this year. It isn’t even September yet and we already have two major horror releases coming in the next two weeks. On August 19th, the remake of Fright Night starring Anton Yelchin (Star Trek) and Colin Farrell will be released and on August 26th, we will the see the worldwide-release of Guillermo del Toro’s newest film Don’t Be Afraid of the Dark. And if that isn’t enough, in October audiences will be treated to a third installment of the popular Paranormal Activity franchise. So in honor of these upcoming haunted house films, here are your: 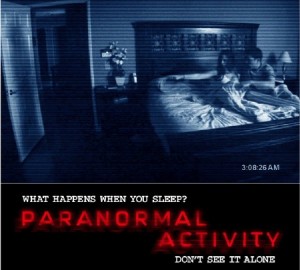 Perhaps the most polarizing film on this list, Paranormal Activity works very well for certain audiences. While Paranormal Activity may seem like a cheap ploy to make money, the execution of the film makes the final product worthwhile. Part of what makes “jump-scare” movies work is how the tension is built up as the viewer waits for the scare that they know is coming. By using the same shots over and over, the viewer is programmed to concentrate on the differences and therefore it enhances the scare. If you’re willing to buy into the concept, Paranormal Activity can be pretty effective.

As one of the first haunted house films to take us out of old, creepy houses, Poltergeist puts the story in suburbia. Released within weeks of E.T., this “other” project by Steven Spielberg has spawned an entire franchise. Poltergeist works because it gives the viewer a number of quality scares, great special effects and enough restraint to keep those effects from overshadowing the genuinely effective movie.

While the original is slightly better than the American remake, both deserve a spot on this list. Ju-On and The Grudge solidified what would turn out to be an American obsession with Asian horror. The love still lingers today and for good reason. Part of what makes horror films work is their ability to take the viewer out of his or her comfort zone, and a foreign environment certainly does that. Creepy meowing kids and hands in the hair will also accomplish this…so kudos to The Grudge.

No, not the 2006 film starring Kiefer Sutherland, but the 1977 film starring Cristina Raines, Ava Gardner and Chris Sarandon. This overlooked gem is masterful at putting the viewer in a general sense of unease. There is a certain *ahem* memorable scene involving Beverly D’Angelo on a couch that would throw any viewer for a loop. It is also one of the few great movies to allow its tension to be built until the very end. This is not a film you can easily forget.

While some may dismiss these films as pop horror,  it is actually their camp and use of gimmicks that make them fun. Director and producer of the original House on Haunted Hill, Richard Castle incorporated a flying skeleton in the theaters of the original release of the 1959 version, which would swing out over the audiences heads to parallel the final climactic scene. The remake in 1999 did less in regards to promotional gimmicks, but allowed the characters on screen to value a good cheap scare. Geoffrey Rush channels his inner Vincent Price to give a wonderfully fun performance and Famke Janssen shows her sexy sadistic side as his vengeful wife.

Ironically, The House on Haunted Hill and The Others are next to each on this list when in every other regard, they could not be more different. The Others is a thoughtful, nuanced film that gets better with each viewing. While it may be remembered for the iconic “I’m not you’re daughter” scene, The Others layers on chill after chill to build tension and unease. Perhaps one of most true to form for “gothic” horror, The Others expertly crafts a tone and atmosphere that seeps into your subconscious.

Another film that values subtlety and psychological chills more than gore and violence, the original version of The Haunting works on a different level than most horror films today. Based on what is widely regarded to be the best haunted house novel of all time, Shirley Jackson’s “The Haunting of Hill House”, the film, The Haunting comes very close to matching its source material in terms of its tone and sense of dread. While it may be considered “slow” by today’s standards, for those who have the patience to be absorbed by a film, The Haunting will not disappoint.

Directed and co-written by the Guillermo del Toro, The Devil’s Backbone tells the story of young boy who finds himself in a remote orphanage after his father’s death in the Spanish Civil War. The backdrop of the Spanish Civil War serves as a device to tell a beautiful story with themes of guilt and betrayal and the dangers that exist in childhood. There is a lot going on in this film and if you don’t mind subtitles, you will find a film that would be the defining masterpiece of any other writer/director.

Much like films 3 & 1 on this list, The Changeling is as good of a film as it is spooky/scary. Wonderfully directed by Peter Medak, The Changeling shows the effects of a father’s grief after losing his wife and daughter in a car accident. George C. Scott portrays a broken man, trying to piece together his life until he begins to experience the supernatural. The Changeling uses subtle images and sounds to deliver the chills and succeeds on virtually every level.

What else can be said about what is arguably the best horror movie ever made. Combining the demented imagination of Stephen King, the flawless direction of Stanley Kubrick and the iconic performance by Jack Nicholson, The Shining is a testament to just how good horror can be. It’s surprising to know that in the year of its release, The Shining was actually nominated for two Razzie awards, including one for Worst Director.

What was left out? What’s your favorite haunted house movie? Let us know in the comments section below.