Finally. A movie about time-traveling turkeys. 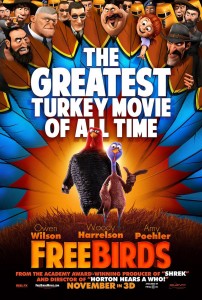 Reggie (Owen Wilson) is considered the odd-ball on a farm full of dim-witted turkeys, and is the only one who realizes that the farmers are fattening them up to be eaten. When the day finally comes that the other turkeys realize he was right, they push Reggie to the front of the line – only to fall into the hands of the president of the United States, becoming the annual pardoned turkey for Thanksgiving. The president’s daughter convinces her father to let them take Reggie back to camp David, and so begins the good life – full of television, pizza, and even a turkey-sized presidential bath robe.

Reggie’s life of comfort is abruptly cut short when Jake (Woody Harrelson), the brawn to Reggie’s brains, kidnaps and tries to convince him that they must go back in time to take turkeys off of the Thanksgiving menu. The two of them eventually make their way into a talking time machine named S.T.E.V.E. (George Takei) and journey back in time to 3 days before the first Thanksgiving. There they meet a group of wild turkeys, lead by Chief Broadbeak (Keith David), and Reggie finds a certain infatuation with his daughter Jenny (Amy Poehler).  The turkeys must work together to save their kind and alter history forever.

The film is beautifully animated by Reel FX on their first feature-length animated outing. The colors are bright and vibrant, and the animation feels just about as smooth as a Disney-Pixar or Dreamworks film. The 3D was used well, not so much for gags as it was for depth. The company did a great job of blending animation with realism, giving the film a cartoon-like look with an attention to detail.

There aren’t many kids films that revolve around Thanksgiving, as only a 30-minute Charlie Brown television special from 40 years ago comes to mind. Free Birds solves that problem, as it delivers a fun and original story that packs enough to keep both children and adults entertained. If you take it too seriously, you aren’t in the right movie. The movie was recently met with criticism from Rush Limbaugh for being a “bastardization of American history, and it’s being done by a bunch of leftists, multiculturalists, who do not like this country and do not want kids, young skulls full of mush, learning the truth.” That is over-analyzing it.

Sure, the film may not be 100% historically accurate – but it is also about time-traveling turkeys. Last time I checked, that wasn’t real. So get over it. Instead, the story is original and clever, and is a fun look at the holiday.

There is a pretty star-studded cast providing the voices for the feature. The leads are well cast, as Wilson and Harrelson share a nice chemistry together. Poehler is a great addition to the film, as are Keith David, Dan Fogler and George Takei. If you are a fan of SmodCast’s Scott Mosier, who co-wrote and produced the film, I counted at least three characters that he voiced.

Often times kids movies fall into one of two categories; they are either too simple for adults to enjoy, or they are too slow and complex – going right over their target audience’s heads. Free Birds has a nice balance, although occasionally suffering from a few lulls in the pacing. But overall it is a cute and original story, with a good sense of humor and plenty for all to enjoy.  Unless we see a bunch of pizza boxes replace our turkeys this year, I wouldn’t think too much into it. Just sit back and enjoy the show.

Free Birds is a B-