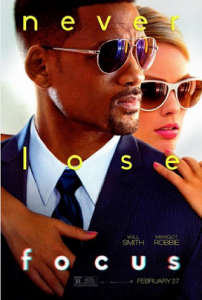 Heist movies have been among the more highly revered genres for decades and it seems unlikely that it will stop anytime soon. In most cases, the audience finds themselves rooting for the person(s) committing the often elaborate heist in the hopes that they may get to walk off into the sunset thus granting a payoff (figuratively and literally speaking) to viewers and the characters. So, what are we getting with Focus?

Focus follows the life of highly experienced con artist, Nicky Spurgeon (Will Smith) who has, obviously, been in the game for a while and has a wildly successful and covert operation with his team in which massive amounts of money is generated from selling ‘hot’ merchandise and other commodities. Enter young, and intrigued Jess Barrett (Margot Robbie) who crosses paths with Nicky and immediately wants to be a part of the operation. As expected, Jess seems to be transforming from high potential apprentice, to someone of high affection to Nicky. Needless to say, things get just a little complicated.

Calling back to the previous point about heist movies in general, is the desire for the successful pull off of the heist. More often than not, movies of this type make the audience overlook the criminal actions of the protagonists due to the fact that the person or group they are robbing has far more reprehensible qualities. In Focus, most of the people being robbed are actually quite oblivious bystanders. In fact, there is a scene (which is well filmed by directors Glenn Ficarra and John Requa) in which a slew of random people get robbed blind via slight of hand techniques. To the credit of the scene, and watching the team work, it was a sight to behold and was quite entertaining. On the other hand, imagine being one of those people walking down the street and in startling late fashion discovering something of high value was taken. You would be a little pissed and paranoid would you not? It would be hard to say that there really is a villain to be found opposite Nicky and his crew which can make rooting for them a tad more difficult. Perhaps that is the point here.

How about the two leads? Smith and Robbie work well together and seem to evoke genuine chemistry. Not to say that it is earth shattering, but at the very, very, least it is a better love story than Twilight. Note: I have not actually viewed a single minute of running time from the aforementioned series, it is just that the trailers were more than enough. It is genuinely fun to watch their characters interact with one another as true intentions may not always come to the forefront. To say that Smith’s Nicky and Robbie’s Jess have trust issues may be a slight understatement. There are clear signs of the classic who can be trusted or rather the perception of the situation rather than the actuality of it. Additionally, the circumstances in which Nicky and Jess meet are something that would likely only happen in a movie with noting the probabilities, but the initial conversation is organic.

To be frank, Focus does not copy and paste the general framework of movies that happen to involve heists or some type of “score”. There are twists and turns apparent to keep things fresh. For some, there is a such thing as too many twists and turns to a point where it feels unnecessarily convoluted. By the end, there is a sense of finality for all parties involved.

To address another thing, we all know Will Smith was the box office king for quite some time (read:throughout the 90’s and early 00’s) and his last film, After Earth was a clear cut misstep in his career. Focus is FAR superior to that, but at the same time one can’t say that Focus lands in the top five of his otherwise stellar movie career. As per usual, Smith displays a smooth, collected character in Nicky Spurgeon. The film has it’s fun moments, but to say it achieves greatness would be a bit of a stretch.