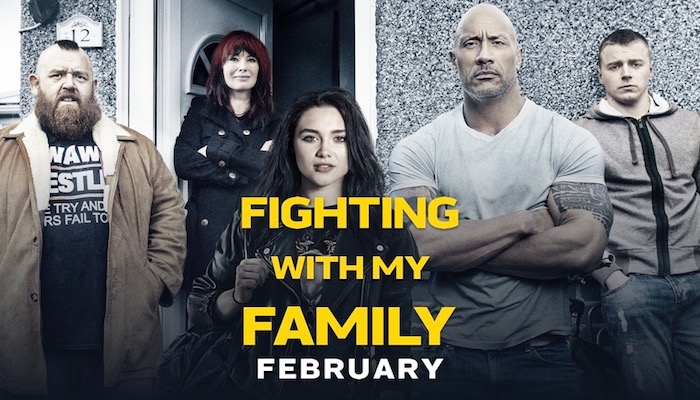 World Wrestling Entertainment (WWE) Movie Studios has given us no reason to think any film that comes out of their camp will be any good. From box office duds like The Marine and 12 Rounds, and a plethora of straight to DVD films, the company does not have a credible track record. Well, maybe that is about to change with the new true story, Fighting With My Family.

The film is based on the life of Raya Knight, otherwise known by WWE fans as Paige and her rise to stardom. The drama/comedy tells the story of Knight’s family, which is a wrestling family from the UK. Knight, along with her brother Zak and her parents run a wrestling school and put on shows, barely scraping by. The one thing that seems to keep the family going is the dream that Raya and Zak will get the call from WWE. When they finally get the call for an open tryout, the family is elated, yet disappointed when Raya gets the call to go to WWE’s training facility in Florida, while her brother Zak is told no. Much of the film focuses on Raya’s struggle to overcome the struggle of being thousands of miles away from her family and Zak’s struggle to come to grips with the fact that he will never be a WWE wrestler.

While some may think the world of wrestling is hokey and fake, the film shows quite the contrary. Yes, the results are predetermined and scripted, but the action is real and quite dangerous if the craft is not perfected.

Vince Vaughn does an admirable job playing Hutch Morgan, the NXT trainer whose job it is to put wrestlers through the ringer and weed out anyone who can’t hack it. While The Rock, Dwayne Johnson also appears in a few scenes, which are all standout scenes, especially given Johnson’s rise to fame as a WWE wrestler, it’s Nick Frost and Lena Headey who star as Raya’s parents who steal the show. Their scenes at the dinner table are among some of the funniest in the movie. The film also knows when to get emotional as well. There is a little bit of everything for moviegoers in Fighting With My Family. Wrestling fans will obviously gravitate to the film more than the average person, as there are not just cameos by The Rock, but also a few other WWE superstars. I won’t spoil the surprise.

As a lifelong WWE fan, I can say the Florence Pugh’s portrayal of Paige was spot on. She was quite believable in and out of the ring. Director Stephen Merchant did a nice job mixing the comedy into the film to keep it lighthearted as well. Overall, Fighting With My Family is a fun look into what it takes to make it in the wrestling world, all the performances are strong and the movie moves at a smooth pace, never seeming to get bogged down. And of course, it doesn’t hurt to have Johnson reprise his role as The Rock on the big screen. In the few scenes he has, he oozes the charisma of a Hollywood leading man, but never seems to overpower the lesser-known actors in the scenes with him. Fighting With My Family is one of the first must-see films of 2019.

Fighting With My Family gets an A