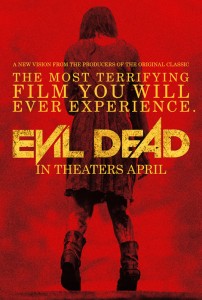 When I first heard about the remake of The Evil Dead, I was skeptical. I mean one couldn’t help but think it would be terrible, much like the horror remakes of the last few years. One thing that separated this from the other line of horror retreads was the fact that Michael Bay was nowhere near this picture. To my surprise and delight, the remake of Sam Raimi’s cult-hit is a homerun.

Director Fede Alvarez takes no prisoners in the gruesome film. Evil is lurking in that small cabin in the woods, and no one is spared. Audiences will be surprised to find out that original film hero Bruce Cambell and collaborator Rob Tapert serve as producers of this gore-fest. Fans of the original may want to stick around after the credits for a “groovy” surprise.

Just like the original, the film is comprised of a cast of virtually unknown actors and actresses. The acting, overall, is quite good. The story is pretty much along the lines of the original, except names and some relationships are changed, so it’s not a total retread of the original Evil Dead. Shiloh Fernandez plays David, taking the place of Cambell’s Ash. David never really takes over as the hero like Ash did in the previous film. His sister, Mia, played by Jane Levy, is the first to be possessed by the demon in a very uncomfortable tree-rape scene. Lou Taylor Pucci plays Eric, who discovers a mysterious book. As he reads on, it’s clear that the group of friends are destined to be tortured by the demon the Necronomicon, as it is known by fans, releases.

While the original’s premise involved a group of spring breakers, similar to most slasher films, this version centers around a group of friends who gather at a cabin in the woods to help Mia recover from a drug addiction. The friends brush off a lot of her behavior early in the film as withdrawal symptoms. This idea does not last for long, as they find her in a scalding hot shower, flesh burnt and bubbling. Some of the scenes when Mia is possessed drum up images of Linda Blair in Exorcist, but Mia is much more deranged and grotesque.

Horror fans are in for a treat here, as Alvarez spares no one in this gore fest. Blood is dispatched by the truckloads. Gore fans get wicked bite wounds, a person being burned alive, nail gun wounds, severed limbs, and a great scene with a chainsaw. Hollywood may have a shortage in fake blood after this film.

Any type of comic relief from the original film is gone in the updated version. I found myself feeling a bit squeamish in more than one scene, and there are several pretty good scares in the movie. In fact, this film is probably not for the faint of heart. While it received an NC-17 rating when first shown to the MPAA, it was edited to an R-rating. However, it’s still one of the goriest films I’ve seen in a long time. Evil Dead is one of the best horror movies I’ve seen in the last few years. I can’t think of the last time I had so much fun while trying to keep myself from covering my eyes.