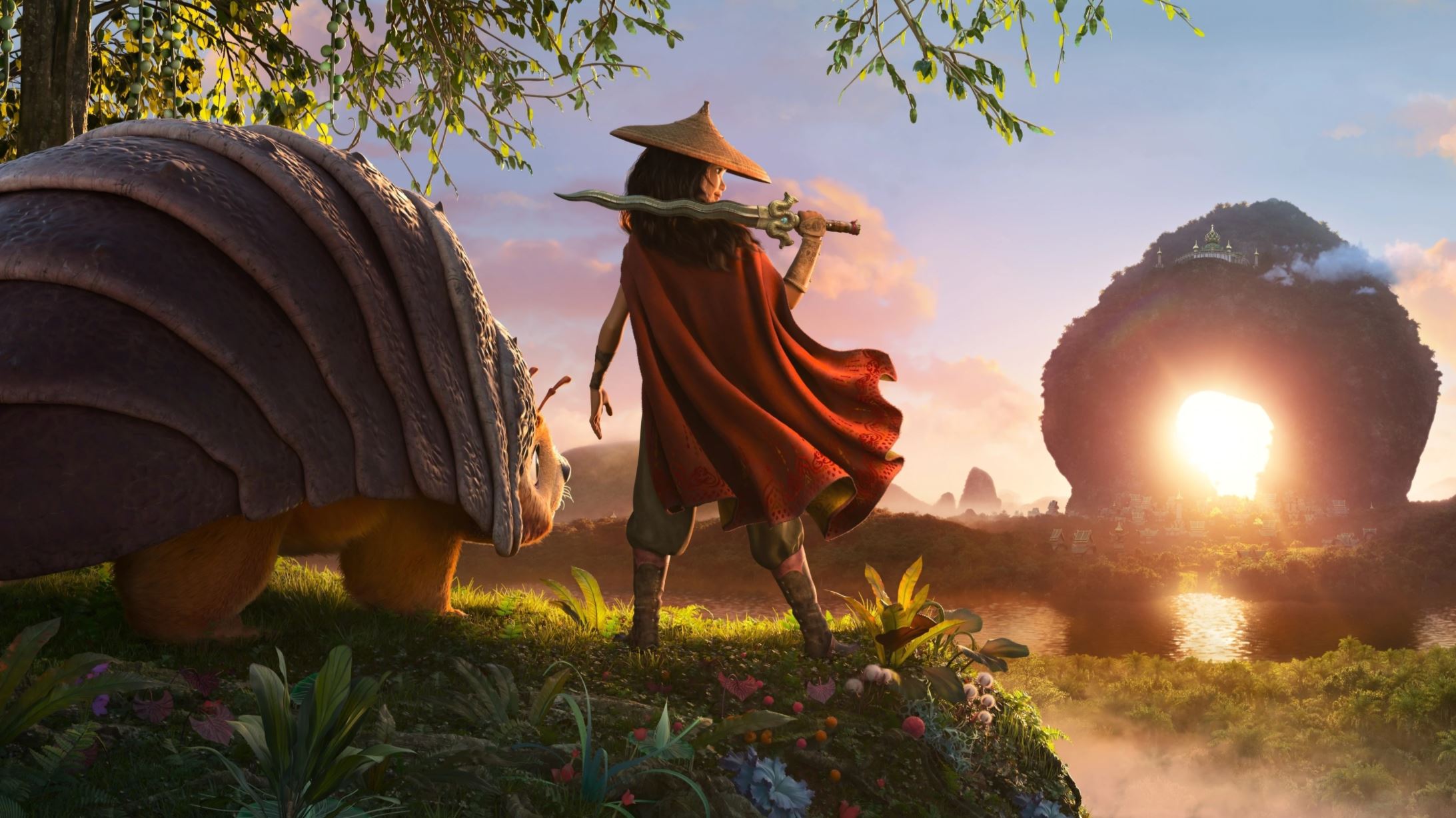 The latest animated film from Disney is available today with Premium Access ($29.99 in addition to the monthly subscription cost gets you unlimited viewing) on Disney Plus. Raya and the Last Dragon is a breathtaking adventure thought the fictional land of Kumandra, showcasing Eastern culture and valuable lessons in the way that “The House of Mouse” does best.

Directed by Don Hall and Carlos López Estrada, the film shows us how the land of Kumandra was divided into 5 factions: Fang, Heart, Spine, Talon, and Tail. The dragons who used to protect the land have been turned to stone by the evil forces of the Druun, turning the mythical creatures into stone while protecting the humans. Their final act was to create an orb of dragon magic, the only thing keeping the Drunn from completely taking over. The orb is guarded by Benja (Daniel Dae Kim), the leader if Heart, and his daughter Raya (Kelly Marie Tran) until the factions become jealous of the prosperity they believe it creates. Their greed and lust for power breaks the orb into five pieces, with each area taking one of them. The Druun is unleashed, turning everyone who does not have the protection of an orb shard into stone, creating a post-apocalyptic wasteland.

Flash forward six years, and we see the damage that has been caused by the Drunn. Raya is a fierce warrior, who rides the desert with her giant pill-big Tuk Tuk (Alan Tudyk) looking for a way re-unite the factions and save those who have been turned to stone. She eventually finds the last dragon, Sisu (Awkwafina), and the two must team up with new friends they make along the way to convince the factions of what they must do for the greater good. Their biggest hurdle is taking on the leaders of Fang – Chief Virana (Sandra Oh) and her daugher, Raya’s old nemesis, Namaari (Gemma Chan).

Right off the bat, the film is stunning. As often the case with Disney’s animation, they look better and better with each film as they find new ways to bring these stories to life. The world of Kumandra is breathtaking, filled with wonderful Eastern culture and gorgeously animated mythical creatures. Watching the film on the largest 4K screen you can find is the way to go, and audiences are sure to be mesmerized by the incredible visuals.

The story is a lot of fun, with excellent performances from all of the actors, and great action throughout the film. There are several excellently-choreographed martial arts sequences that push the animation and will keep you on the edge of your seat. Raya’s sword, which she acquired from her father, is able to break into pieces and turn into chained-pieces – a very cool weapon which is awesome to see in action.

Kelly Marie Tran is wonderful as Raya, showcasing voice talents that we have yet to see until now. Tran was terrific as Rose Tico in The Last Jedi, and it is a shame we didn’t see more of the character in The Rise of Skywalker. Here she gets to shine in the lead, and turns in a fantastic performance. The actor not only excels at the humor of the role (no surprise given she has a background in comedy), but also delivers many touching moments with skill. Raya is a great addition to the long-line of Disney Princesses, and Tran was the perfect choice to voice her.

Coming off of her major role in Jumanji: The Next Level, and her critically acclaimed performance in The Farewell, Awkwafina has proven herself to be quite the versatile actor over the past few years. She’s a hilarious comedian who has been a standout in every film she’s appeared in, leading to a really fun turn as Sisu. We’ve seen the actor be both hilarious and extremely heartfelt, and she combines these two strengths into the lovable dragon. She’s a great addition to the cast, and her chemistry with Tran is excellent.

The supporting cast does a great job, with Gemma Chan playing Raya’s childhood friend-turned-enemy. She plays the tormented and conflicted character well, and it’s fun to watch her face off against her old friend throughout the film. Izaac Wang plays Boun, a child who runs his own boat/restaurant. He’s hilarious as the fast-talking, capable young captain. Benedict Wong joins the journey as Tong, the last of his village who is fighting to save his friends and family. And Thalia Tran voices Little Noi, the comically talented baby who runs with a group of thieving monkeys. The talented actors play well off one another, and form a friendship you become quickly invested in.

Filled with stunning computer animation, an exciting adventure, and timeless lessons, Raya and the Dragon is an empowering tale that families will enjoy for generations to come. The talented voice cast brings this mystical journey to life in true Disney fashion, with lots of fun and laughs along the way. Disney animation has been on a roll for the past decade, with no signs of stopping anytime soon. This is another that is well worth the price of admission, especially as families are looking for safe ways to enjoy their time together at home.