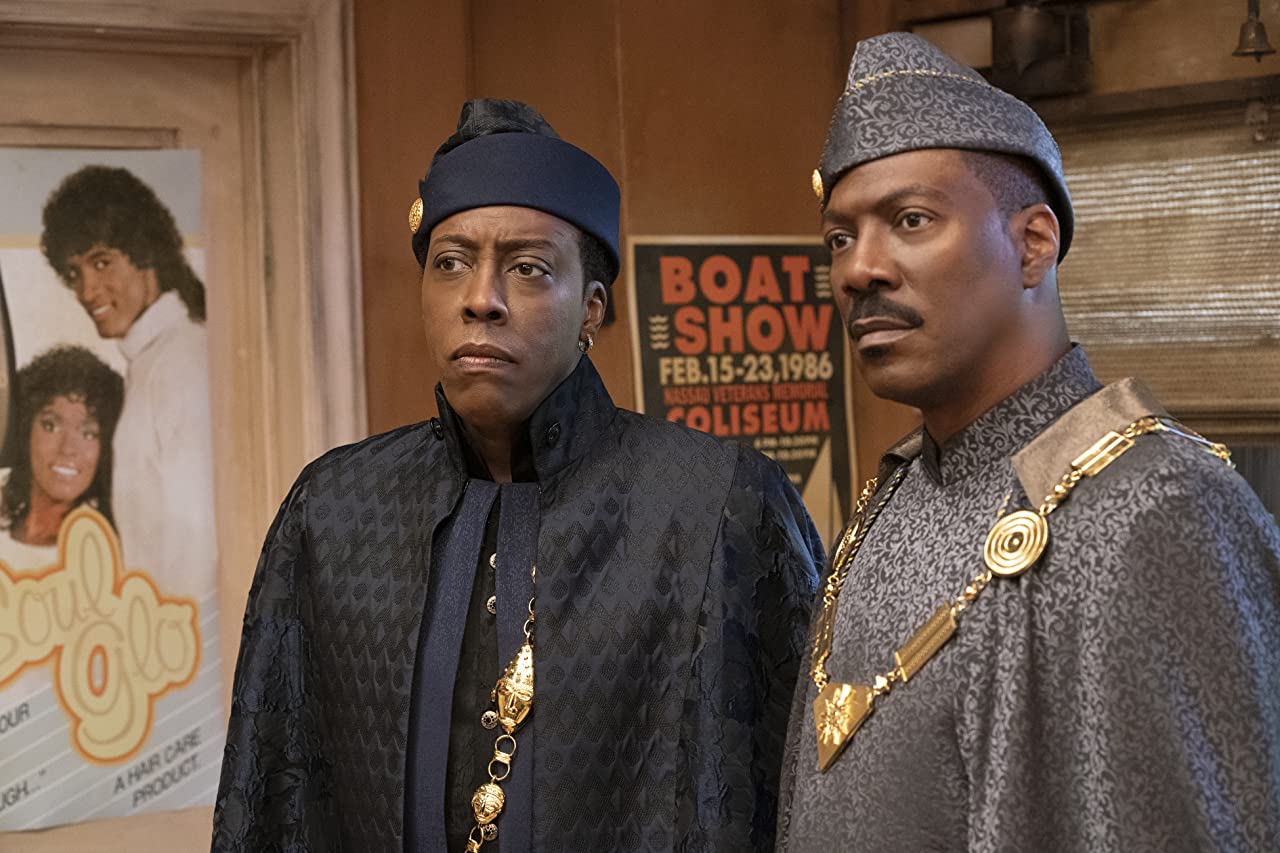 33 years after we first met Prince Akeem and the royal family of Zamunda, Eddie Murphy and most of the principal cast return for Coming 2 America. Directed by Craig Brewer (Hustle & Flow, Black Snake Moan), the film charts familiar territory but doesn’t quite manage to capture the same magic this time around.

Akeem (Eddie Murphy) is still Prince, with King Jaffe Joffer (James Earl Jones) ruling the land in his final days. Knowing that his time is coming to an end, and that his son will be an easy target for a nearby warlord General Izzi (Wesley Snipes), he reveals to Akeem that he has a son from his trip to Queens so many years ago.

Wait, that original trip from the first film? The one where he went to sow his royal oats but never did until he met his Queen, Lisa (Shari Headley)? Yes, that trip. The writers get creative in showing how it happened, and it is what it is.

The premise of the film is basically the same fish-out-of-water story, reversed to take place in Zamunda instead of Queens. Akeem and his trusted advisor Semmi (Arsenio Hall) travel to America to find the prince’s bastard son, Lavelle Junson (Jermaine Fowler) – the product of a one night stand (again, just go with it) he had with a woman Mary (Leslie Jones) on his original trip. The four of them travel back to Zamunda, where Lavelle must learn to be a prince.

The film relies heavily on nostalgia, as if there were any doubts. A sequel to a beloved comedy doesn’t get made this many years later otherwise, and fans would expect nothing less. And it is no doubt entertaining for a while to see all of our old friends, but it only carries the film so far. The script unfortunately lacks most of the charm of the classic comedy – one, because the primary focus was on the biggest comedian in the world during his peak, and two, Akeem was completely naïve to the world outside of Zamunda. While it may seem creative to reverse the stories, you can’t exactly make a kid growing up in Queens that oblivious. He’s lived in the real world, where Akeem did not. So while there are several fun scenes where he is learning to become a prince, they don’t hold the same weight. Ultimately, Akeem takes a back seat to his son in this story, and you lose what made the first one so special in doing so.

Fowler is extremely charismatic as the new prince, and charming in his right. He does a great job with what he is given, and is by no means at fault for the misguided script. His only crime is not being Eddie Murphy, which clearly no one else can be. Had he not been constantly compared to the star of the classic comedy, I have no doubts he could hold his own. But when you are watching a Coming to America sequel, you are there to see Akeem and the other classic characters. Fowler has fun with the role, like everyone in the film, and does a fine job throughout. I hope we see him leading more comedies in the future.

It’s great to see so many familiar faces return for the sequel: the barbershop guys (Murphy and Hall doing their thing without skipping a beat), Reverend Brown (Hall), Randy Watson (Murphy) – they play all the greatest hits, and it’s absolutely enjoyable seeing them again. Shari Headley is wonderful as Lisa again, and it is great to see James Earl Jones in a couple scenes as the King again.

John Amos returns as Cleo McDowell, and gets to riff on the McDonald’s menu one once again. He also has a nice heart-to-heart with Akeem at a pivotal point in the film.

Several other members of the cast return, like Paul Bates as Oha, and Louie Anderson as Maurice. They are joined by new characters like Uncle Reem (Tracy Morgan), newscaster Totatsi Bibinyana (Trevor Noah), and the aforementioned Leslie Jones as Lavelle’s mother.

A lot of the film is a critique of doing things in antiquated ways, all in the name of tradition. Akeem and Lisa have three daughters: Meeka (Kiki Layne), Omma (Bella Murphy), and Tinashe (Akiley Love). His eldest, Meeka, has been preparing her entire life to be a strong ruler who is well-versed in the ways of Zamunda. However, due to their laws, a woman cannot be ruler. Layne is terrific in the role, channeling the strength of Shari Headley, and proving that these women are more than capable of ruling. All of the actors do a fine job.

If it wasn’t clear from his role in Dolemite Is My Name, also opposite Murphy, Wesley Snipes is back. It’s great seeing him return to a villainous role, harkening back to the days of Demolition Man. He has a lot of fun with the character, and his chemistry with Murphy is great once again.

At the end of the day, it’s fun to return to Zamunda and see the characters we know and love. They’ve been a part of our lives for decades, and are iconic in the ’80s comedy zeitgeist. Fans of the classic film will no doubt find much to enjoy from the sequel, but unfortunately it lacks most of the charm that was so unique in the original. Eddie Murphy is in a good amount of the film, but his Akeem is different than the one we first met – and rightfully so. You would expect him to grow after more than thirty years, but it still leaves something to be desired. Nostalgia is a hell of a drug, but it also doesn’t take long for it to wear off.