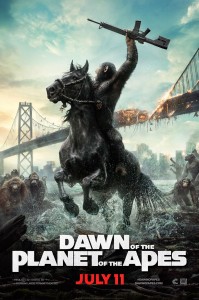 As far as reboots of well established franchises go, Rise of the Planet of the Apes certainly ranked among the ones that was (or is, if you still haven’t seen it) very well worth your time. I certainly wish more sequels would turn out like this one.

Dawn of the Planet of the Apes leads off with the leader of the apes, Caesar (Andy Serkeis), clad in battle paint alongside the rest of his crew out on a hunt. It’s immediately apparent that Dawn of the Planet of The Apes takes place several years after the events of Rise. There’s not only a progression of Caesar and his civilization, but there was a massive breakout of a simian virus that came about as a result of the genetic manipulation of the apes. The virus exhibited such severity in that a massive portion of humanity had been wiped out, and for a time it seems the apes are running the planet.

Naturally, there are still some humans left in the midst of the madness. Enter Malcolm (Jason Clarke), who serves as a leader of sorts among the human characters, and can be deemed the most level-headed of them. Alongside Malcolm is his wife, Ellie (Keri Russell), his son Alexander (Kodi Smit-McPhee). Okay, I previously stated that Malcolm is the leader of the humans, but that role would technically go to Dreyfus, played by none other than Commissioner G….. Gary Oldman. Dreyfus has an increasing distrust of the apes and their overall intentions, and is determined to do whatever it takes to protect the remnants of humanity. Associate of Dreyfus, Carver (Kirk Acevedo), serves as the archetype discriminatory, anger ridden douchebag. You know there’s always a quota to fill for that role in any type of apocalypse movie, right?

Jumping back to the ape population aside from Caesar himself you have his wife, Cornelia (Judy Greer), his son River (Nick Thurston), Caesar’s right hand man Rocket (Terry Notary), his son, Ash (Doc Shaw), and the awesome orangutan, Maurice (Karin Konoval). It wouldn’t be fair to leave out, Koba (Toby Kebbell), as he serves as the ‘muscle’ or general of the apes despite no official naming of rank. The apes themselves truly do shine in the film on multiple levels. For starters, the CGI is great, and the close-ups of the apes display the range of emotions a person would have. CGI can serve to supplement or as a detrimental eye sore. Here, it is without a doubt the former as it sells you on these being believable characters. Aside from the aesthetics, there is the character development among the apes. There is a movie I’m thinking of that has a barrage of CGI characters, but character development seemed to have gotten lost in translation… I won’t name names. Anyway, Caesar has naturally grown a little more distance from humans in general seeing as how the human he cared about is no longer present. Meanwhile, Koba, who in the first film prior to his transformation, truly received the brunt of the torturous human experimentation and as a result has an unceasing resentment. I’d go as far as to call Koba a Magneto of sorts. He was tortured, abused, and dumb founded at the idea of living in the same society of a group of people with a different genetic makeup that was the source of his pain.

When it comes down to it, Dawn of the Planet of The Apes avoids taking the painstakingly simple route. More specifically, it expanded upon it’s predecessor and did not set up the movie to be all the apes are evil, man must mow them down! Or just about all of humanity is evil and heartless and the under dog, er, ape, must conquer over all of them. That last statement got me to thinking about a movie with some of that; most of humanity being painted as an imperialistic, uncaring force… and blue people.. ah nevermind. A better comparison would be when you watch a heist movie, and you find yourself rooting for the people committing the heists (most likely if they’re not sociopathic, murderous thugs), while at the same time, on some level, hoping the police succeed on some level too, because they’re supposed to be good. Though, if you’re riding on a NWA mindset on the police, my comparison just failed terribly. Point being, you see all perspectives and motivations whether it be man or ape. There are villainous acts committed in the film, but that is not to say that one group is that much worse than the other. You may not agree with what some characters do, but for most of them you can see why they felt it was the best course of action.

Admittedly, the movie did feel a tad slow in the earlier acts, but it did serve to build up tension between the human and ape populations respectively. When the action gets going, it really gets going. With the aforementioned character development, it in turn makes the action more impactful. If you enjoyed Rise of the Planet of The Apes, then it’s highly likely you’ll enjoy Dawn of the Planet of the Apes. Among summer blockbusters, this is a couple of hours well spent. Side Note: Here is to hoping the next entry(if there is one) in the franchise is just called Planet of the Apes… the titles seem to confuse people.

Dawn of the Planet of The Apes is An A-